Beethoven, Schubert, and the Anxiety of Influence 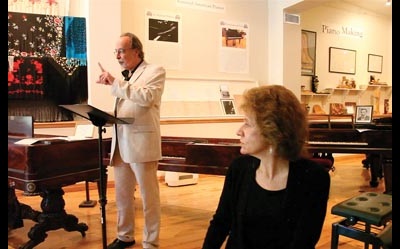 Ludwig van Beethoven was understood to have brought Classical music to the height of perfection while at the same time creating his own personal revolution that pushed the limits of serious art music in new directions. Composers who followed in his footsteps all felt the influence of this giant on their own work, and as a result, had to address the question of how to create something new after Beethoven had seemingly done all that could be done with the Classical style. Schubert was one of those composers who struggled with the anxiety caused by working in the shadow of Beethoven and needing to find a solution to the question of what to do next.

Dr. Jeffrey Langford serves as chair of the music history department and as assistant dean of doctoral studies at Manhattan School of Music. He has appeared as a pre-concert lecturer at the New York Metropolitan Opera for the past eleven years where he presents talks on both French opera and the works of Verdi. Dr. Langford is one of the founders of the summer residency program for young musicians, Manhattan in the Mountains.

Dr. Joanne Polk received her Bachelor of Music and Master of Music degrees from the Juilliard School, and her Doctor of Musical Arts degree from Manhattan School of Music. She has given master classes at many summer festivals and universities across the country, including Summit Music Festival, New York Summer Music Festival, Montclair State University, Kutztown University, and the University of Minnesota. In August 2012, Ms. Polk was one of four directors who launched Manhattan in the Mountains, a three-week summer music festival in the Catskill Mountains, devoted to chamber music, solo performing, and community engagement.

Newburgh man falls to his death at Kaaterskill Falls