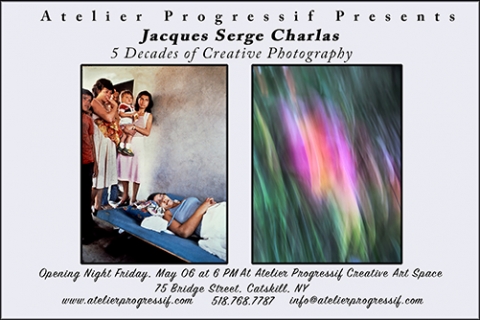 We invite you to join us at the opening of Jacques Serge Charlas, Five Decades of Creative Photography at Atelier Progressif on Friday, May 6th, at 6:00 PM.

The Exhibition will showcase Jacques Charlas’ oeuvre including his first project in the early 1970s documenting the disappearance of Paris’ central market, Les Halles; the El Salvador revolution in the late 70s; coverage of the Soviet-Afghan War in the early 80s; and his story on Wall Street greed.  Later works in the show include Mr. Charlas’ Faces project, produced in the 90s, which portrays deeply surreal images found in ordinary objects; and his most recent body of work, in which he uses the camera as a brush and light as color to create digital paintings of contemporary abstract images.

For five decades, Jacques Charlas has been at the forefront of the creative process.  His images are a highly sensitive mix of social relevance and emotional depth imbued with poetry and an intellectual impact that make them exceptional.

We hope to see you there,