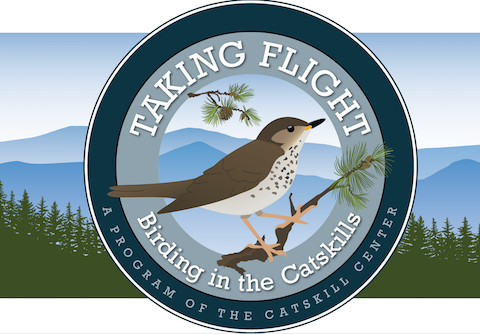 Above: The logo for "Taking Flight: Birding in the Catskills."

For over a century, birdwatchers have come to the Catskills to enjoy the staggering variety of feathered species on display. This weekend’s “Taking Flight: Birding in the Catskills,” held at the Ashokan Center in Olivebridge, is tailor made for them in more ways than one.

Presented by the Catskill Center for Conservation and Development, the three-day event, held from Friday, June 10 to Sunday, June 12, is both a festival and conference.

Speaking to the Watershed Post, co-organizer Peg DiBenedetto said, “For years, people have been saying that the Catskills needs its own bird festival or conference, to highlight both the birds and birders as important and significant to our environment and our economy. So we’ve created a first-class birding weekend. Instead of going for a festival, which is mainly bird watching, or a conference, which is more presentations and academic papers, we decided to combine the two.”

Among the presenters will be Chris Rimmer, the executive director of the Vermont Center for Ecostudies. He’ll deliver a keynote speech on Friday, June 10 at 7 p.m. entitled “Bicknell’s Thrush: Conserving a Bird of Two Worlds.” The next morning, he’ll take to the field, leading a dawn hike up Slide Mountain in search of both Bicknell's and Swainson's thrushes, as well as other mountaintop breeding birds.

The focus on Bicknell’s thrush is, in part, because it is “our” bird here in the Catskills: it was discovered on Slide Mountain, the tallest peak in the Catskills, in the 19th century.

“On June 15, 1881, an amateur ornithologist and botanist named Eugene Bicknell was hiking up Slide Mountain, and discovered the bird,” he said. “It was considered a subspecies of the gray-cheeked thrush until 1995.”

Bicknell’s thrush is unusual in part because of its mating system. Female thrushes mate with more than one male, carrying and laying eggs from several partners. This practice, known as polygynandry, does not occur in other thrushes. Up to four males will perform duties connected with one nest, including feeding fledglings.

Another oddity: Bicknell’s thrush is only found in the Northeast U.S. and in neighboring regions of Canada, except for colder months when it winters mostly in the Dominican Republic and, to a lesser extent (due to deforestation), in Haiti. Rimmer will discuss how and why the bird has recently been classified as threatened in Canada, and as endangered in the U.S., and what can be done about it.

Although he’s spent a quarter century studying Bicknell’s thrush and other birds, Rimmer still gets excited about seeking them out. He’s looking forward to the hike up Slide Mountain.

“We’ll go to the main location where Bicknell first identified them,” he said. “They have amazing courtship songs. The males trace big, wide circles in the air. You can hear the songs moving across the sky.”

Saturday’s keynote is courtesy of Cornell’s Chris Wood and Jessie B., creators of the eBird birding database.

DiBenedetto mentioned many other opportunities for birding “onsite, on the Ashokan Center's 300-plus acres, and offsite as well,” she said. “Additional hikes will be offered on Friday, as well as Sunday, and [there will be] a chance to paddle the wetlands at Halcottsville's Lake Wawaka.”

The three-day event will also include bonfires, nighttime owl walks and “social hours” during which attendees can reluctantly return to earth to exchange birding tips.