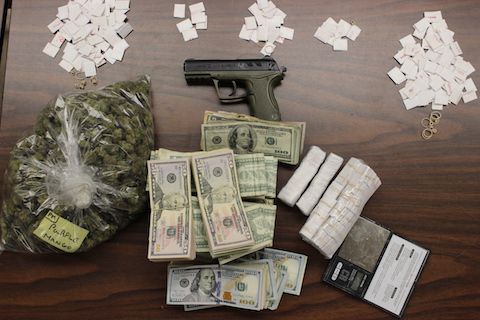 Above: Drugs, cash and an imitation handgun found in Woodstock on Thursday. Photo via the Ulster Regional Gang Enforcement Narcotics Team.

Two people have been arrested in connection with a large heroin bust in the Ulster County town of Woodstock, according to a press release from the Ulster Regional Gang Enforcement Narcotics Team.

They also found .78 pounds of marihuana, 1.2 grams of crack cocaine, drug packaging materials, methadone, an imitation handgun and $9,825 in cash, according to the press release.

Three people were found in the residence, police say: 56-year-old Allen B. Martin of Woodstock and 38-year-old Marnie J. Henry of Saugerties, as well as a third person who has not been identified.

Henry was charged with misdemeanor criminal possession of a controlled substance in the seventh degree and was released.

Three busted for narcotics sales in Margaretville; pot plants discovered at home of one suspect, police say
Route 28 grow house busted in Shokan
A week of drug busts around the Catskills