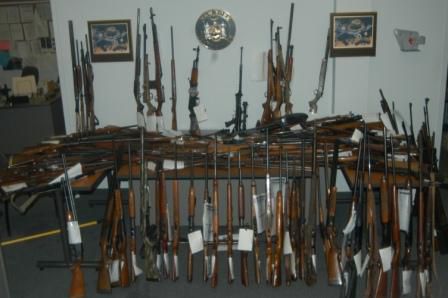 Above: Investigators seized 134 long guns, four assault rifles, one electronic stun gun and two handguns from a Lumberland residence during a drug raid. Photo via the New York State Police.

Police seized a large cache of weapons and drugs on Friday, Jan. 30 during a raid on a home in a wooded area in the Sullivan County town of Lumberland, according to a press release from the New York State Police.

Investigators from the State Police and the Sullivan County District Attorney’s Office searched a house at 251 Haring Road  during the course of a narcotics investigation, police say.

"The two handguns and several of the long guns were reported stolen from Pennsylvania," police said in the press release.

Two arrested, 1,087 decks of heroin seized in Woodstock
Route 28 grow house busted in Shokan
A week of drug busts around the Catskills
Cairo man arrested on moonshine and weapons charges