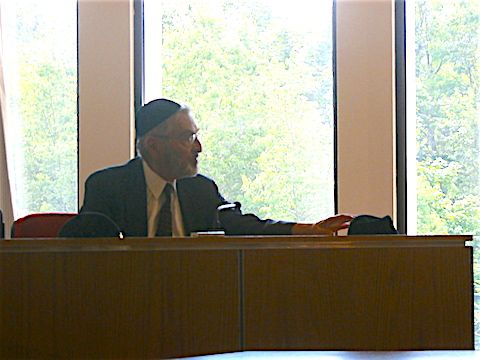 Above: Rabbi Irving Goodman at Monday’s forum in Monticello. Photo by Timothy Knight.

Members of Sullivan County's Orthodox Jewish community and elected public officials came together in the Sullivan County village of Monticello on Monday, June 20 to strengthen relations between year-round county residents and vacationing Hasidic Jews as tensions simmer between the two communities.

Home to about 80,000 year-round residents, Sullivan County sees its population triple in the summer with the arrival of hundreds of thousands of Orthodox Jews from New York City, who stay in campsites, bungalow colonies and housing developments.

The forum was sponsored by the Human Rights Commission of Sullivan County (HRCSC). It was attended by an audience of about 50 people, which included an assortment of local residents, human rights advocates, Orthodox Jews and public officials, all of whom attempted to quell growing discord between the two communities.

Setting the tone for the nearly two-hour dialogue, HRCSC Chairperson Judy Balaban said that one of the missions of the commission is to "foster a community of respect," which she hoped would create an environment for both sides to understand their differences.

Balaban's theme was echoed by speakers representing Sullivan County’s law enforcement office, legislature, code enforcement office, public health office and Orthodox Jewish community. All stressed the importance of establishing and maintaining a clear line of communication with each other.

Former Thompson Supervisor Tony Cellini, who discussed code enforcement issues, said that the goal of the forum was for "everyone to live in peace and harmony."

Cellini encouraged summer residents to get their ducks in a row for building projects and not wait until the week before their arrival to apply for building permits.

Defending the nearly 1,300 homes occupied by Orthodox Jews in the town of Fallsburg, local attorney Jerry Orsack debunked claims that any of them are tax exempt.

Calling Sullivan County's summer residents "important customers," Orsack said that the purpose of the dialogue was "to understand each other’s culture."

Stating that "we have to have a dialogue," Sullivan County Sheriff Michael Schiff referred to Ferguson, a Missouri suburb of St. Louis where outrage over racism erupted in demonstrations in 2014, as an example of what happens when communities don't talk to each other.

Despite devoting time to issues such as keeping the county clean, property maintenance, employment opportunities and traffic concerns, the forum did not address the ongoing battle between Orthodox Jews and year-round residents in the Sullivan County village of Bloomingburg.

A fight over a proposed 396-home housing development has prompted violence and a court battle in the tiny Sullivan County village, located in the town of Mamakating, and has involved an FBI investigation and accusations of voter fraud by the Orthodox community and voter suppression by the municipality.

Yet, the topic was not on the table at Monday's forum.

In one of the few moments of strife at the forum, a member of the Hasidic community blasted the town of Fallsburg's proposed one-year moratorium on all residential developments with more than five units.

Only minutes later, a resident of Fallsburg accused the Orthodox community of creating a health hazard in the town by littering and dumping trash.

Although that was the extent of the controversy at the Monticello forum, hundreds of year-round residents and members of the summer Orthodox community butted heads at a public hearing that was held that same day just a couple of hours later in Fallsburg, according to Times Herald-Record reporter Amanda Loviza-Vickery.

At the meeting, year-round residents who favor the town imposing a moratorium on development while it reconsiders its comprehensive plan clashed with summer residents, many of them Orthodox, who say that the moratorium threatens their homes, the newspaper reported. The "sometimes-rowdy crowd" in Fallsburg was a stark contrast with the unity of the earlier forum in Monticello.

HRCSC member and forum organizer Bill Liblick concluded the Monticello forum by calling for the formation of a county committee comprised of representatives from both communities. He said that skeptics doubted such a dialogue could exist now.

Asked to deliver the final statement of the event, Rabbi Irving Goodman commented only that he wanted everyone to understand the meaning of one word—Shalom—which in Hebrew means, simply, "peace."

When asked later in the week about the disparity between the theme of the forum and the disputes in Fallsburg and Bloomingburg, Liblick said that they were "totally different issues."

Explaining that the Human Rights Commission will "not get involved in politics," Liblick said that the forum was a success because it started a dialogue.

There have been meetings that aimed to create dialogue between the Hasidic and your-round communities in Sullivan County before.

In 2004, a group called the Committee to Establish Better Relations with Summer Residents held a series of meetings in Monticello to discuss issues of trash disposal and tax exemptions at bungalow colonies, according to an article in the River Reporter.

But Liblick said that Monday's Human Rights Commission forum "took it to a different level."

"Our focus is more of a focus on the common good of Sullivan County,” he said.