Suspected vandal arrested amidst anger over Hasidic development in Bloomingburg 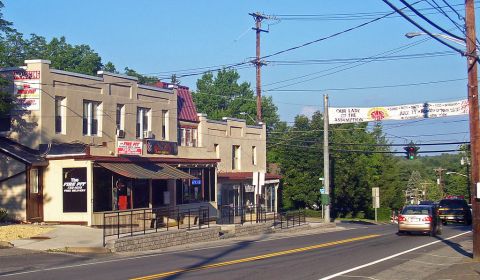 A man has been arrested for allegedly vandalizing a building in the village of Bloomingburg owned by Shalom Lamm, a developer at the center of a heated controversy over a Hasidic housing development in the tiny Sullivan County village.

The man, 38-year-old Michael Essig (left) of Wurtsboro, was arrested on August 3 on charges of breaking of a large plate glass window at 79 Main St., according to the New York State Police.

The store is a former hardware store owned by Lamm that has been vandalized repeatedly in recent months, according to the Times Herald-Record. Lamm has called the vandalism a "hate crime."

Lamm is attempting to build a 396-home development in the village of Bloomingburg. Many of the homes "seem likely to be bought up by Hasidim," as a New York Times article put it in March:

Hasidim in Brooklyn’s Satmar community have published ads in Yiddish newspapers heralding a new Hasidic community in Bloomingburg with the name Kiryas Yetev Lev, an echo of an incorporated village farther south, Kiryas Joel near Monroe, of 21,350 Hasidim. (Yetev is a Hebrew acronym for Joel Teitelbaum, the grand rabbi who established the Satmar movement in the United States after the ravages of World War II and for whom Kiryas Joel was named.) Given that Hasidic families often have six to eight children or more, the development could more than quadruple Bloomingburg’s population.

The potential influx of Hasidic newcomers has angered locals in the 400-person village, and many oppose the development.

Since January, the tension has exploded into allegations of anti-Semistim, secret land dealings and ballot-stuffing, and has led to an FBI raid, a contentious election, a court case, and a movement to dissolve the village entirely.

The THR has been giving the story the full-court-press treatment. Check out its special page on the controversy, "Bloomingburg in the Balance."