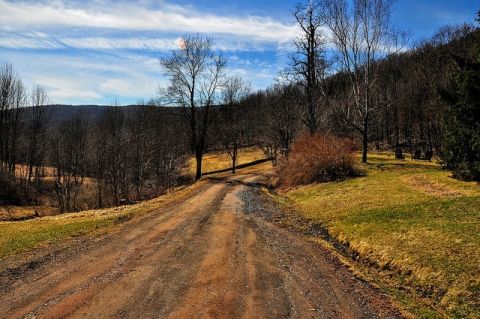 Above: Finkle Road in the Delaware County town of Andes. Photo by Denick Herrin, entered in the 2016 Catskills Outdoor Guide Photo Contest.

With the 2016 legislative session drawing to an end in Albany, state lawmakers are pushing for the creation of two land banks in the Adirondacks and Catskills which would allow the state to approve small public projects within the forest preserves without amending the New York State Constitution.

Sponsored by Sen. Betty Little and a slew of her Adirondacks and Catskills colleagues, the proposed legislation would make 750 combined acres in the Adirondack Forest Preserve and the Catskill Forest Preserve available to small projects approved by the New York State Department of Environmental Conservation. No individual project would be allotted more than fives acres of state land.

Five hundred acres in the Adirondacks and 250 acres in the Catskills would be made available for eligible projects, which include environmental infrastructure projects located near highways, bridge projects, straightening curves on roadways and municipal water supply projects.

The creation of the new land banks is being proposed as part of an amendment to Article 14 of the New York State Constitution, which, if approved, would allow public utility lines and bicycle paths on certain state lands in addition to the land banks.

"These new land banks would ensure small projects for municipal water, bike paths, highway and bridge improvements, public utilities, and environmental infrastructure could proceed without the need for repeated, time-consuming amendments to the New York State Constitution,” said Sen. Seward, one of the co-sponsors for both the proposed amendment and the enabling legislation.

The legislation places careful limits on projects and guarantees that any acreage taken from the forest preserves will be replaced with a comparable amount, Seward said.

"Leading environmental advocates, including the Adirondack Council and the Nature Conservancy, joined in the supporting the bill,” he said.

Also on board with the proposed land bank is the Catskill Mountain Club.

The club’s vice president, Wendell George, feels that the legislation addresses an important need of local communities by allowing for limited development where options other than using forest preserve lands are impractical.

"This is a common-sense measure that solves limited land use issues while protecting New York's forever wild lands,” George wrote in an email to the Watershed Post.

Although both pieces of the requisite legislation were easily approved by the New York State Senate over the past week, a long road ahead remains for the proposals to become reality.

Owing to the nature of the resolution to amend the State Constitution, it needs to be passed by two successively elected New York State Legislatures. If approved this year and next year by lawmakers, the amendment could be placed before voters for their consideration in November 2017.

Currently, both the proposed amendment and the enabling legislation are sitting in the New York State Assembly's Environmental Conservation Committee, where only one day remains in this year's legislative session, which concludes on Thursday, June 15.