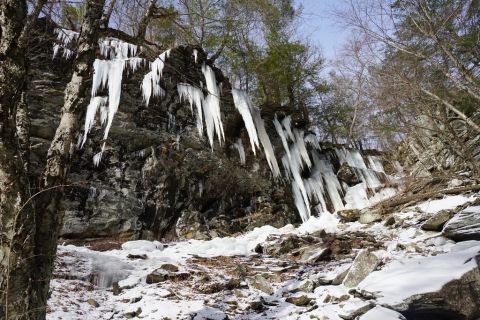 Above: A view looking up through Upper Devil's Kitchen. The newly-legal trail towards Platte Clove Road is on the right. Photos by Marty Molitoris/Alpine Endeavors.

An unmarked trail that is the safest way into the Devil’s Kitchen has become public property, thanks to the efforts of a pair of ice climbers, one of whom has donated a two-acre piece of land in Platte Clove to New York state.

The Devil’s Kitchen in Greene County is one of the Catskills’ most picturesque—and dangerous—attractions. The cliff-lined gorge in the steep, rocky section of the Platte Clove valley in the town of Hunter, is a hugely popular spot for hikers and ice climbers, and is also scene of many accidents and even deaths. (One climber fell 80 feet and miraculously survived last summer.)

Until recently, portions of the Devil’s Kitchen were only accessible through private property or treacherous unmarked trails on public land. Access was not only dangerous, it was also sometimes illegal.

Above: The now-public unmarked trail into the Devil's Kitchen.

The most manageable way into the gorge, an unmarked trail into the gully that begins near the old stone arch bridge on Platte Clove Rd./County Road 16, was owned by a private landowner.

Three years ago, Marty Molitoris, an avid ice climber and owner of Ulster-County-based Alpine Endeavors, learned that the landowner, Viera Bolcek, was offering her property in Platte Clove for sale.

Bolcek had tolerated hikers and climbers illegally traversing her land to get to the Devil’s Kitchen, but Molitoris worried that a potential buyer would limit or prohibit all access. So he sprang into action.

“I’ve been climbing for twenty-some years and I’ve seen places like this get closed off,” Molitoris said. “It’s such a special area to me and many others.”

Above: The now-public trail to the Devil's Kitchen, shot from the air.

Molitoris contacted Bolcek to see if she would be interested in selling the portion of her land where the Devil’s Kitchen trail access was located.

He was looking for funds to purchase the property when his friend and climbing partner, Morris Sachs, offered to help. Sachs and his wife Sheryl agreed that they would purchase the land and donate it to New York state to make the trail to the Devil’s Kitchen public.

Bolcek agreed, and in June 2014 she sold 2.1 acres of cliffside property along Platte Clove Road to Sachs for $30,000, according to Greene County property records.

By Nov. 1, 2015, Sachs had donated the property to the state of New York, according to Molitoris. Now the most accessible way for climbers and hikers to enter the Upper Devil’s Kitchen is public.

“We made it a permanent public access rather than making people go through private property,” Molitoris said. The parking area closest to the newly-public access point, which is located on Platte Clove Rd. just before the arch stone bridge, serves a number of hiking trails and climbing spots in the area.

Above: The lower Devil's Kitchen. To the left is the now-legal path to the road.

Molitoris said that he expects the parking area to be expanded by New York state in the future to accommodate the increasing amount of people hiking and climbing in the area.

Parking is prohibited in the snow plow turn-around area just beyond the bridge, which is still private property, he said. Molitoris said that he doesn’t expect more climbing and hiking accidents in the Devil’s Kitchen now that access to the dangerous gorge is public.

Hikers and climbers were already using the trail; the only difference is that now this use is legal, he said.

"People have died there because it’s really steep; there are memorials,” Molitoris said. “I’m not concerned [that there will be more accidents], because people went in there regardless. But those who go should be properly equipped and experienced with rough terrain."