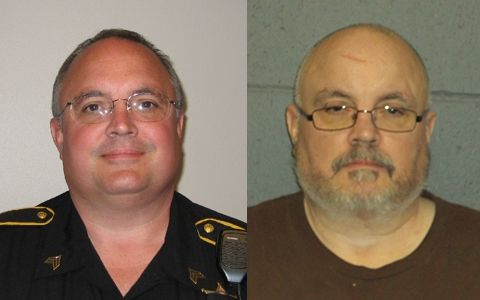 Theodore Tiska, a former star Delaware County sheriff's deputy who is charged with attempted murder for an alleged assault on his wife, used a meat cleaver in the attack that seriously injured the woman, according to Acting District Attorney John Hubbard.

Maria C. Tiska sustained “serious injuries” in the April 18 attack at the couple's Masonville home, Hubbard said, with “four or five deep cuts to her arms and legs.”

Hubbard said that Maria Tiska called 911 after the incident and was taken to Wilson Memorial Regional Medical Center in Johnson City for treatment. She was released the next day, he said.

Theodore Tiska was arrested on April 18 following the attack, and was initially charged with second-degree assault, according to a press release from the New York State Police.

On Thursday, May 5, a Delaware County grand jury increased the severity of the charges against Tiska, handing up a two-count indictment charging him with second-degree attempted murder and first-degree assault.

Tiska was arraigned on the charges on May 9 in Delaware County Court. Andrew Puritz, an Oneonta attorney, was assigned to represent him. Tiska was jailed on $75,000 cash bail or $150,000 secured bond. He remained in jail on May 20.

Tiska and Puritz consented to a “probation investigation before trial.” Such investigations are also known as “pre-plea” investigations, and are often a precursor to a plea bargain.

Hubbard said that the investigation will help determine the course of the case.

“These are obviously grave charges,” he said. “I think the report will give us a better idea how to proceed.”

Among the documents on file in the case is a notice that the prosecution plans to use statements made by the defendant after he was arrested at trial.

According to the notice, on the night he was arrested for the assault, Tiska made a statement about blood to State Trooper Ian Bilek at the New York State Police barracks in Unadilla.

“It's menstrual blood. It's a bad time of month at the house,” Tiksa reportedly said.

Tiska was employed at the Delaware County Sheriff's Department from 1984 until 2012, retiring as a sergeant. In August 2008, Tiska was named “Delaware County Employee of the Month."