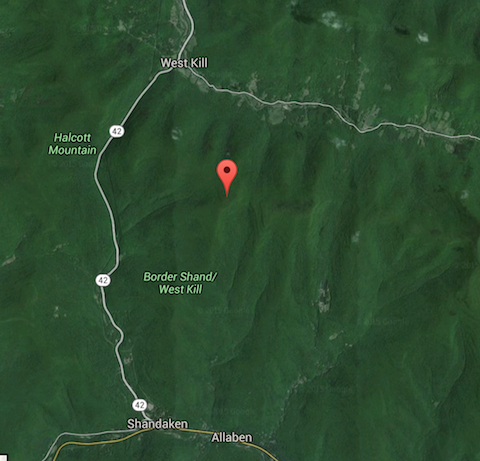 Above: The summit of Sherrill Mountain in Greene County is a three-mile bushwhack from the nearest road. Image via Google maps.

Five forest rangers and two volunteer firefighters hiked six miles of rough terrain to a remote Greene County mountaintop to rescue an injured hiker on Sunday, Jan. 31, according to a press release from the New York State Department of Environmental Conservation.

At 1:30 p.m. on Sunday, the DEC received a call reporting that a 71-year-old woman from the Ulster County town of Marbletown had been injured near the summit of Sherrill Mountain in Hunter-West Kill Wilderness in the Greene County town of Lexington.

The woman had slid down an icy section between Sherrill and North Dome Mountains, injuring her ankle, according to the press release.

The hiker's location was extremely remote. The hike up Sherrill Mountain is a rough one--no trails that lead to the summit, according to local hiking guides, and hikers must bushwhack miles through remote Catskills wilderness.

Seven rescuers set out to aid the woman on Sunday afternoon, hiking with rescue equipment over three miles to the hiker's location near the Sherrill Mountain summit.

The rescuers--five DEC forest rangers and two volunteers from Lexington's fire department--reached the hiker at 5:45 p.m., about 30 minutes after the sun had set.

They stabilized the woman's ankle, then carried her three miles down the mountain in the dark using an improvised backpack carry and an improvised litter, the press release states. They reached the parking lot at 1:15 a.m on Monday, Feb. 1.

According to the DEC, "the injured hiker declined further medical treatment at the scene and stated that she would seek additional medical care at a later time."