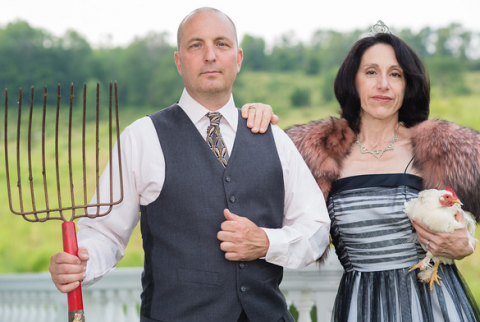 Above: Edward Callahan, left, with Joanne Callahan, his wife and co-owner of Callahan Catskill Real Esate, in a 2013 publicity photo for their business. Photo by Joe Damone.

Callahan was a former New York City Police Department officer and survivor of 9/11 who moved to the Catskills after his retirement with his wife, Joanne Callahan, a longtime local realtor who survives him. Together, the Callahans ran Callahan Catskill Real Estate, based on Main Street in the Delaware County town of Andes, and are fun-loving fixtures in the community.

Edward Callahan was active in local politics as a member of the Andes Town Planning Board. In 2015, he ran a nailbiter race for a seat on the Andes Town Council, briefly appearing to win the seat by seven votes in the unofficial election results. When the final election results came in, however, Callahan lost the race only by a slim margin of four votes, according to the Delaware County Board of Elections.

Callahan was born in 1960 in Manhasset, Long Island into a family of NYC police officers. His father, Bernard V. Callahan, worked as an officer with the New York Police Department, and his son, Michael, and daughter, Diana, are also on the force. His mother was Angela M. Rinato. He was the beloved brother of Maureen and Judi and a cherished uncle and godfather, according to his obituary.

Callahan was also an avid sportsman, outdoorsman, dart player and motorcycle rider, and a devoted parishioner of St. Anne’s Church in Andes.