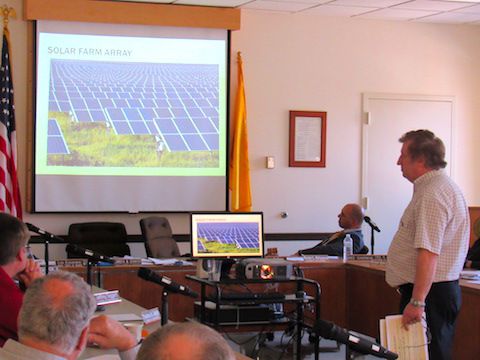 Above: Michael Sabansky, Delaware County's director of real property tax services, gave a presentation on solar farms to the Delaware County Board of Supervisors on April 13. Photo by Robert Cairns.

With the possibility of commercial solar electricity generation coming to Delaware County, the Delaware County Board of Supervisors has taken steps to make sure that solar developers pay property taxes.

The board, at its meeting on Wednesday, April 13, adopted a resolution to enter into “host community benefit” agreements for commercial solar installations. The resolution circumvents state rules, which provide property tax exemptions for such installations for 15 years.

“I'm sure we're going to get a few in the county,” he said. “We do have lots of land and lots of power lines.”

He showed several slides of solar installations around the world, the nearest being in Ithaca and on Long Island, where the Brookhaven National Laboratory has the largest solar farm on the east coast, covering 200 acres.

“These people are in business to make money,” Sabansky said. “If they don't make it from the power, they'll make it from tax write-offs and grants.”

Sabansky urged the supervisors to adopt the resolution to tax solar farms.

“If you do nothing, you'll get no taxes, whatsoever,” he said.

Sabansky said that he has discussed the matter of taxing solar farms with the county’s assessors.

“We have all agreed that we'd like a uniform process across the county, all the towns, all the villages, all the school districts,” he said.

Delaware County’s host community benefit tax plan would be negotiated with developers and would provide half of its revenue to the town, a quarter to the county and a quarter to the school district involved. Sabansky said at an earlier meeting that the county’s villages probably will not come into play because they don't have enough vacant land to accommodate solar farms.

An added benefit of the host community benefit plan tax agreements, Sabansky said, is that they would prevent solar developers from challenging tax assessments for the duration of the contract.

Davenport Supervisor Dennis Valente asked how the agreements would be administered. He called the issue “complex” and said that rates would differ within a town if one school district opts in to the agreement but another one does not. Hamden Supervisor Wayne Marshfield asked if towns should review their site plan laws and zoning ordinances to prepare for solar farm developments.

Planning Director Nicole Franzese said that her department is helping towns to do such reviews. She said that the concern she hears most regarding solar farms is about requiring bonds to remove solar panels if a developer goes out of business.

The resolution does not affect residential or agricultural solar installations.

At the end of the presentation and the discussion, the board adopted the resolution with only Franklin Supervisor Jeff Taggart opposed.

“I want more information,” Taggart said after the meeting. “There are many cloudy areas.”

He agreed with the resolution's intent, however. “I am in favor of taxing commercial installations,” he said. “I agree it's got to be done. It's how we go about it that concerns me.”