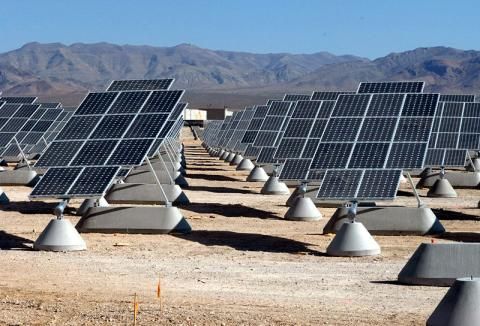 Today on Economix, the New York Times's economics blog, Harvard professor Edward Glaeser stakes out a controversial proposition -- controversial, that is, among non-economists, who aren't used to having the misery of the American worker discussed with the detatchment of a weather forecast.

Glaeser's point? Efforts to support American manufacturing are beating a dead horse, with or without the help of a government-subsidized green-tech movement.

Green tech may be worth investing in, Glaeser writes, but not because it's going to create American jobs. To make the point, Glaeser points to a recent high-profile failure for the green energy movement -- the closing of the heavily-subsidized Evergreen Solar plant in Devens, Massachusetts, and the outsourcing of its 800-odd manufacturing jobs to China.

Conservative critics, including Michelle Malkin, argue that the Devens closing provides a warning about green energy: “The myth that ’green jobs’ are a boon to the economy keeps getting pierced by failed green jobs boondoggle after failed green jobs boondoggle.” But it was always a mistake to think that clean energy was going to be a jobs bonanza, and we should be investing in green technology whether or not it produces jobs.

America has had many high-tech breakthroughs over the last half-century, but those innovations rarely provided abundant employment for the less educated workers who need jobs most. The Devens closing reminds us that even when ideas are “made in America,” production is almost always cheaper in China.

Glaeser's op-ed struck a local nerve at the Daily Freeman, whose editors posted a response piece that's attracting a fair share of outraged comments. The story notes that the flight of green-manufacturing jobs overseas is underway in New York State as well:

The Mid-Hudson Valley effort to grow a solar energy industry — in part with state and federal subsidies — was rocked last month when SpectraWatt Inc., a startup maker of solar cells, laid off more than 100 workers and closed production at its southern Dutchess County plant, citing declining conditions in the European market for solar panels.

As several commenters at the New York Times's website point out, even if he's right in claiming that green-energy investment will never revitalize U.S. manufacturing, Glaeser is taking a very narrow view of what constitutes a "green job." Nicholas Newgarden of Chicago writes:

Ed says that, "... we shouldn’t pretend that cheaper solar energy will end up employing millions of our less-skilled citizens," but I disagree. Ed is looking at solar energy in this article solely through a manufacturing lens, and is missing the obvious: These solar panels must be installed, Ed. Right? Right. The Chinese aren't going to be installing solar panels in Peoria or Flint. Installing solar panels is child's play that any handyman with a few hours to spare can learn, and with over 300-million folks here who live in these structures we call homes, that's a lot of solar panels that need installation.

Just for fun: Earlier this year, job-market analysts at CareerCast released their annual rankings of 200 jobs in the U.S., taking into account salary, hiring prospects, and the stress and other demands of the job. On its face, CareerCast's 2011 job outlook supports Glaeser's claim that the real growth industry in America is ideas -- or, as he puts it,

In the long run, America will be richer than China only by having smarter citizens, and that requires the skills that come from schools and cities, not dispersed factories.

Most of the top twenty jobs on CareerCast's list were math- or science-focused, with "economist" scoring a plummy #20. "Electrician" came in three-quarters of the way down the list, at #148. (Ranking nearly dead last: "newspaper reporter," which earned sky-high points for stressfulness and scored a wretched #188, below "maid," "dairy farmer," and "actor.")