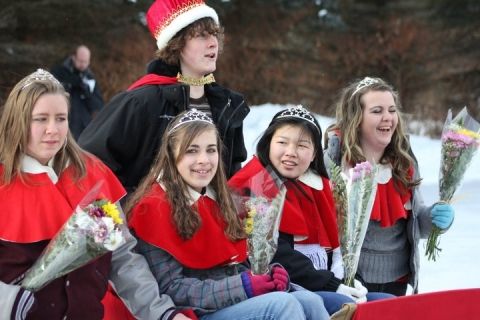 For 56 years, Livingston Manor's Rotary has thrown a huge party in the depths of January. The annual Livingston Manor Ice Carnival is held for a full three days at venues around the Sullivan County hamlet.

On Friday, the Ice Carnival King and Queen will be crowned at the annual dance at the Livingston Manor Central School Gym. On Saturday, snow sculptors of all expertise levels are invited to compete in a "New York Landmarks" snow sculpture contest, held in the Rotary Park on Pleasant Street. (Organizers promise that "prominent VIPs" will be the judges, so bring your "A" game.)

Above: Sleigh rides at the 2011 Ice Carnival. Photo via the Ice Carnival's Facebook page.

On Sunday, the public is invited to the Walter Seeley Memorial Skating Rink to watch high-level amateur figure skaters perform their moves. You can ride in a horse-drawn sleigh, try on some snowshoes, watch the Ice Carnival royal court on parade, and do a little ice skating yourself, too.

Last year's Carnival had to be cancelled due to the weather, which means that this year's carnival should be doubly fun.