A Surrealist art project: Exquisite Corpse of the Catskills 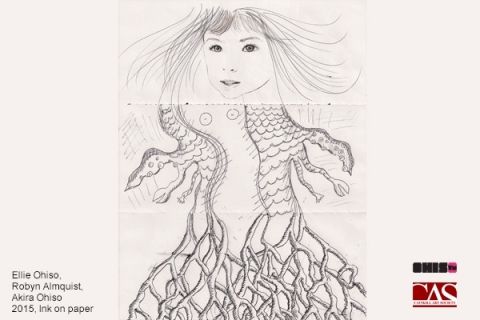 Exquisite Corpse was an early 20th century favorite pastime for the likes of André Breton, Marcel Duchamp, Yves Tanguy, Joan Miro and Man Ray. It’s the visual equivalent of a freestyle jam session: A folded piece of paper passed between participants, each of whom adds their own contribution. When the paper is unfolded, a hodgepodge of “happenstance art” is revealed.

In collaboration with the Catskill Art Society, Ellie and Akira Ohiso are putting together a round of Exquisite Corpse that will feature Catskills artists. The Ohisos, the duo behind the recently folded (and much missed) Green Door Magazine, are inviting artists to enter a free public lottery to be among the teams working on the art project.

Twenty-one artists, to be paired in seven groups of three, will be chosen randomly at the lottery at the CAS Arts Center on Saturday April 18, 2015 at 2 p.m. Then the teams will work together on their portions of the exhibit, completing the work of other artists.

The Ohisos explain in a press release:

On June 5, the resulting artworks will be unveiled at the Catskill Art Society’s Elevator Gallery, where they will hang through July 24. The contributing artists will split sales three ways.

To get in on the fun, artists from Sullivan, Ulster, Orange and Delaware Counties in New York and Wayne and Pike Counties in Pennsylvania are invited to submit their names via email to [email protected] by April 15, 2015. For more information, visit ohiso.com.

We spoke with the Ohisos about the game, and about life as creative instigators in the Catskills.

Watershed Post: Is the Exquisite Corpse game widely known in the art world?

Ellie Ohiso: We both learned it in art school. It became part of our general unconscious art education. You’re not the first to ask us this question, and perhaps this type of creative experiment is not more widely known.

Q: How exactly did the idea of bringing it to Catskills artists germinate and bloom? Has anyone involved ever "played" it before, or is it a matter of reviving the corpse after decades?

Ellie: Over the early winter, we started doing our own art again. Something we hadn’t done in a while. Working alongside Akira, seeing him collage what I would never have the guts to do, or even conceive of, had me thinking. You produce art differently if you’re creating with another artist. The collaboration, inspiration, whatever actually changes the artistic process. What if we did something like this on a grander scale, without taking ourselves too seriously? Exquisite Corpse, as conceived by the Surrealists, was played outside the institutional art world. It was an exercise in relaxing.

Akira Ohiso: We had to create an Exquisite Corpse for the press release (see above).  When I tried the Exquisite Corpse exercise all my reflexive artist choices kicked up, yet didn't work with the constraint of using just an ink pen and having to complete the work of another artist. There was also the pressure of having one chance to create my part, until I just decided to draw and not think about it. Then I created something I wasn't sure I liked or disliked but it was different than what I would usually do with my go-to medium.

Q: You say the method “pulls artists out of their comfort zone.” That sounds potent.

Ellie: We’re intimately familiar with the Catskills and Hudson Valley art community. I can walk into a show and immediately recognize an artist’s style and work. The aesthetic is what makes the artist powerful. But, as artists, we know what it’s like to actually produce the art. It’s a challenge, at times. Putting an artist in a box of constraints can sometimes help you break free, in a weird way. To say “You must finish this other artist’s work on paper with ink only.” There’s something totally terrifying and liberating at the same time. Is it going to be a challenge? Hell yeah! Can I use it after the winter we’ve had? Hell yeah.

Akira: Constraints and working with others is an exercise in compromise.

Q: Do you find the arts community in the region cohesive? Scattered? Mixed?

Ellie: I think it’s really hard being a working artist in general, and more specifically in the Catskills. And the rub is that the Catskills is fodder for all this really great artistic inspiration. So while it’s harder up here, it’s also more possible. For about three to four months in the winter, we can theoretically be producing much of our work in isolation. But we’re all producing in the same place. And we know what it’s like to be producing art in these conditions. And so, yes, there is a unity in that.

Akira: I guess the question would be what does it mean to be an artist in the Catskills? Sometimes it feels like there are these pockets of artists in small Catskills towns doing great work, but with little dialogue between each other. Not that it always has to be a Kumbaya moment, but if young people are getting the message that they need to leave in order to be recognized or appreciated as artists then something needs to be addressed. I also feel a real disconnect between local residents and transplants. I would like to see the arts do a bit more to bridge this gap and create more understanding.

Q: How have things been since Green Door Magazine closed? How's life around your part of the Catskills these days? Are there any future dreams in the works you care to drop a hint about?

Ellie: It’s a blessing and a curse to have an opportunity to reinvent myself after our success with Green Door. After shuttering the magazine, someone told us that Green Door was a three-year public art experiment in what was possible for our area. What I’ve missed the most is the opportunity to attempt grassroots change through constant experimentation. It took me three years to learn that an idea deemed not feasible can likely be done. The Catskills have been getting a lot of mainstream media attention of late, and I’d like to see some of the spotlight shining on Sullivan County in particular. Exacting positive change here can still feel very pioneering, and it’s a daunting prospect, but there’s a sense of infinite possibility too. Whenever we come up with an idea for a community-driven project, there’s a moment in time where I think ‘Why am I doing this?’ but usually the ‘Why not?!’ ends up canceling that out. I’d like 2015 to contain more unconventional positive projects like Exquisite Corpse of the Catskills.

Akira: Whenever you end an artistic project it is natural to feel a bit lost. Transitions are always difficult, especially during a long cold winter. But that is part of the creative process, to say goodbye to one thing in order to discover the next. I live in Sullivan County where there is long-standing poverty and myriad social issues which continue to create suffering for many residents. "Art for art's sake" does not always work when there are these kinds of issues in plain sight.  Any future projects are keeping this in mind.