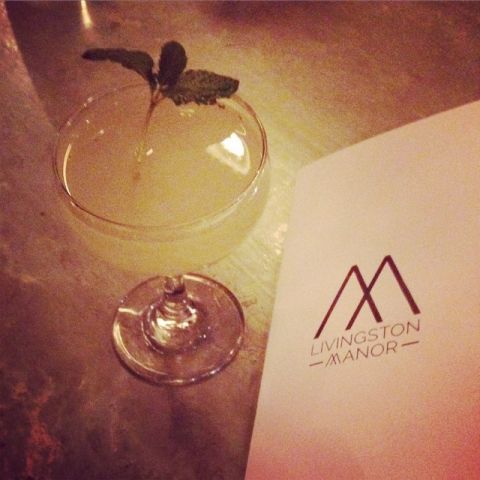 The bar, which opened in December, is named after the town, and is meant to bring the Manor's "small town ethos" to the city. One of the bar's owners, Matt Roff, spent summers in the Catskills, according to an article in Brooklyn Magazine:

[T]he bar itself is all Upstate charm, named after a quiet Catskills town near where Roff vacationed with his family as a child. “Livingston Manor was kind of my second home growing up,” he explains. “My family had a bungalow in the 70’s about ten or fifteen minutes away from there in the Catskills — you know, the Jewish Alps?”

Livingston Manor is peppered with nods to those Jewish Alps, from its retro summer camp-inspired logo to its food and drinks program, which promises to be a classy yet unpretentious list of old favorites and more innovative, creative fare. “The drinks will be a mix of things people will recognize and also something if they feel like trying something they’ve never seen at any other bar,” says Kampanets, who worked with Broad to develop a cocktail menu driven by seasonal takes on classic styles like the Livingston Fizz, which combines Black Dirt Bourbon (distilled in Warwick, New York), citrus, ginger, a fresh egg white and a dab of heavy cream, shaken hard, topped with soda water and served in a Collins glass over ice.

"We have a great relationship with Catskill Brewery [who] are located in Livingston Manor in upstate NY," he explained. "The owner was a key factor in heading up the fight against fracking in NY. It certainly helps us rest easy knowing local breweries and distilleries will have safe water to work with for a long time in the state."

We asked Lisa Lyons, the newly-elected president of the Livingston Manor Chamber of Commerce, what she thinks of her town being the inspiration for a Brooklyn watering hole.

"The small town ethos of their bar will surely attract folks who appreciate trailblazers and local, hand-crafted food and drink," Lyons wrote in an email. "Once they hear about the bar's link to a small town in the Catskills, no doubt many will map it and come! We're blessed with great lodging (The Arnold House), beer (Catskill Brewery), small-town charm, an outdoor store (Morgan Outdoors) and a stunning backyard (the Catskill Park). Where's the highway?!"

Believe it or not, this isn't the first time Sullivan County has inspired city alcohol aficionados. In 2012, a Manhattan bar called The Press Lounge won accolades for a cocktail called the  Sullivan County Democrat, named after the venerable Sullivan County newspaper of the same name and made with pickled ramps and Peace Vodka from the Catskill Distilling Company.

Below: The Sullivan County Democrat cocktail. Photo via Time Out New York.