It's taken seven years, but Route 28 in Ulster and Delaware counties has finally received legislative approval to become the Catskill Mountains Scenic Byway, according to a press release from New York State Senator James Seward.

Seward made the announcement on Tuesday, June 23, in what officials hoped was the last day of the legislative session, which has run close to a week over its normal schedule this year.

State approval means that the byway will be designated on maps and will be eligible for federal grant money. It also means that someday soon you'll see the byway's signature logo, which features a bobcat paw print (above), along the roadway from Olive to Andes.

It's been a bumpy road for the byway. Several communities developed cold feet about the plan in 2012, and one -- the Ulster County town of Hurley -- dropped out of the byway entirely that year, citing worries that the byway designation would whittle away the town's ability to have home rule.

In its long planning process, the byway has gotten its own theme song composed by Jay Ungar and Molly Mason ("Catskill Mountain Home") and its own audio tour.

On May 1, the Department of Transportation's Scenic Byways Board voted unanimously to approve the byway. Then the bill went to the state legislature for consideration.

Read the plan for the Catskill Mountains Scenic Byway by clicking here. Read the text of the legislation here.

Below: Members of the Central Catskills Collaborative at the New York State Department of Transportation on May 1, the day that the NYS Scenic Byways Advisory Board approved the long-proposed Catskill Mountains Scenic Byway. From left to right: Robert Selkowitz of Olive, John Duda of Fleischmanns, Planner Peter Manning, Drew Boggess of Olive, Iris Mead of Margaretville, Bill Rudge of DEC Region III, Carol O’Beirne of the Central Catskills Chamber of Commerce, Rob Stanley of Shandaken and Diane Galusha of Middletown. Photo by Jo Mano of SUNY New Paltz.

Correction: Tuesday, July 23 was not the end of New York's legislative session, although many had hoped it would be. The session continued into Wednesday, July 24 and is scheduled to continue later into the week. 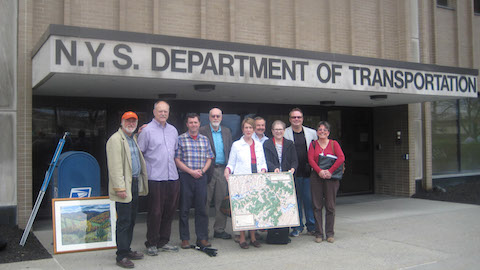