Above: An injured eagle was found on the side of Route 17 in Sullivan County on June 9 by a passing trucker. Photo via the New York State Police.

An injured male bald eagle found by the side of Route 17 in the Sullivan County town of Rockland was rescued on Tuesday, June 9 after being spotted by a truck driver who called 911, police say.

Mario Giorbano, a truck driver for New Jersey dairy distributor Balford Farms, noticed the eagle in a ditch on the side of the highway around 10 a.m., where it appeared to be stuck in the mud, according to a press release from the New York State Police.

Giorbano stopped his truck, examined the eagle, realized it was injured and called 911. State troopers from the Liberty and Roscoe barracks responded to the call, as did wildlife rehabilitators from New York and Pennsylvania.

Rehabiliators Kathy Michele, from Narrowsburg, and George Banta, from Beach Lake, Pennsylania, used a blanket and a dog crate to maneuver the eagle into an SUV and took it away for x-rays and possible treatment, police say.

Above: Wildlife rehabilitators and state police responded to a 911 call about an injured eagle, which they were able to place in a crate to transport for treatment. Photo via the New York State Police.

Police guess that the eagle was hit by a vehicle while feeding on a raccoon carcass in the road.

Giobano decided to give the eagle a name, police say:

Before leaving the scene to continue with his truck route deliveries Mr. Giorbano nick-named the male bird "Anthony."

Below: Anthony, the injured male bald eagle, being transported after his rescue on June 9. Photo via the New York State Police. 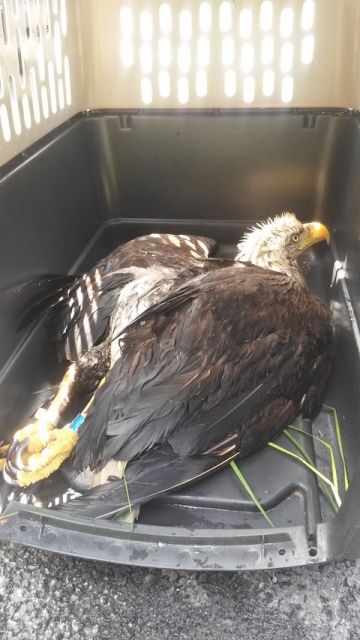