How to stay safe outdoors during hunting season in the Catskills 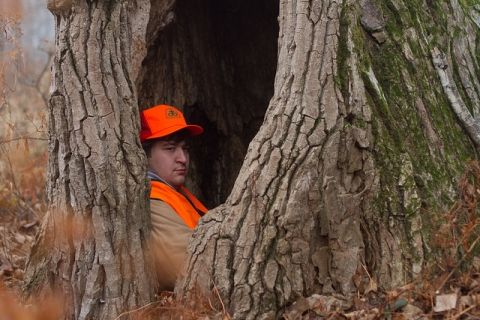 Today—Saturday, Nov. 21—marks the beginning of rifle season in the Catskills. Rifle hunting season runs through Dec. 13, which means that hunters and hikers need to be share the woods safely during this unseasonably warm fall. (Daytime temperatures forecast for this coming week hardly dip below 40 degrees.)

The November hunting season is bookended by early bear season in September, archery season in early November and a muzzleloader season in December. By far, rifle season is the most popular, with most hunters taking aim at deer and bear.

Both hunters and hikers must take care to avoid each other in the woods.

“Caution is certainly advisable, but fear isn't necessary, if you think about where you're going and you prepare properly for your trip,” said Rob Burbank, the director of public affairs for the Appalachian Mountain Club.

“Any hunter worth his salt follows the number one rule of hunting: fully identify your target,” said Mark Andre, a registered New York State guide (and the husband of this reporter.)

Here are a few common sense reminders to stay safe outdoors during hunting season in the Catskills: