Get vertical: Ice climbing in the Catskills 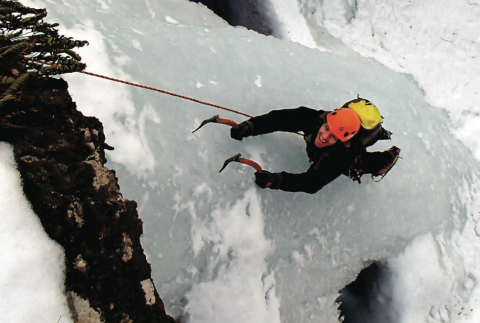  A climber ascends a pitch at Viola Ravine in Kaaterskill Clove. Photo by Marty Molitoris of Alpine Endeavors (alpineendeavors.com).

When winter cloaks the Catskills’ many crevices and waterfalls in ice, devotees of a slow-going but fast-growing sport take to the hills. Armed with sophisticated gear, ice climbers pick their way up mountain faces and across ravines, delving deep into the woods by way of vertical surfaces that last only a few weeks each year.

“It’s just so beautiful to be out there. It’s so pretty, so serene, so secluded,” says Marty Molitoris, the author of "An Ice Climber’s Guide to the Catskill Mountains" and owner of Alpine Endeavors, a guiding company based in Rosendale.

“Ice climbing is just something you should experience if you live here; it will make winter go by so fast.”

Above: Photo by Marty Molitoris of Alpine Endeavors (alpineendeavors.com).

Although rock climbers prefer the Shawangunk mountains to the southeast, the Catskills’ climate and geography create a very hospitable environment for ice climbing, creating and luring fans of the cold-weather sport in growing numbers. One measure of its popularity: The latest edition of Molitoris’ book, published in December 2013, is twice as large as the previous version. It catalogs the Catskills’ six distinct areas for ice climbing, with about 170 new climbs.

“The winter is a beautiful time in general. Things are starker,” says Rich Gottlieb, the proprietor of Rock and Snow, a shop in New Paltz that sells and rents gear. “Each place is unique and has its own sense of wonder and its own sense of adventure.”

While the sport is not unique to the Catskills — and places like Quebec are more renowned — the variety of terrain and widespread access to publicly owned land combine to draw adventurers. Some of the most popular spots are in Greene County: Kaaterskill Falls just outside of Palenville; Stony Clove, a 2,200-foot pass in Hunter; and Pecoy Notch near Tannersville.

“It’s the diversity that’s attractive,” says Gottlieb, who has been ice climbing in many states over 40 years. “You don’t go to the same spot every time — it’s not bowling.”

Like any sport, there are levels of difficulty, from the equivalent of a bunny hill to a black-diamond descent in skiing, Molitoris says. To get started, all you really need is the right cold-weather clothing and a guide. Guiding outfits like Molitoris’ Alpine Endeavors, Eastern Mountain Sports in Gardiner and Mountain Skills in New Paltz provide gear, including helmets and spiked footwear called crampons.

A typical outing includes meeting at Rock and Snow, which serves as an informal headquarters for both rock climbing in the Gunks and ice climbing in the Catskills, gearing up and heading out for daylong trips, in small or large groups. Alpine Endeavors offers private one-on-one lessons for $280 per day; group instruction is less expensive per person and can range up to parties of a dozen or more. Mid-January through the end of February is the heart of the season.

One downside of overpopulated ice climbing areas is that the ice gets “picked out,” Gottlieb said, meaning too much foot traffic renders the terrain less desirable.

“When that happens, you lose some of the spirit of making your own way,” said Gottlieb, who accomplished a landmark “first ascent” in early 2014 by climbing a flank of Sugarloaf Mountain in Greene County that had not been climbed before.

Because the Catskills have so many sites of such varied levels of difficulty, even beginners can experience the feeling of pioneering new trails, he said.

Catskills ice climbing enthusiasts gather each February for a festival celebrating their passion, which offers clinics ranging from beginner to advanced, gear demonstrations, slideshows and backcountry trips. It is usually held the second weekend in February; this year's event was last weekend, Jan. 30 through Feb. 2. Check the website for details of the 18th annual event planned for 2016 (catskilliceclimbing.com/catskill-ice-festival).

“It poses greater challenges and risks doing any sport in the winter, but it also offers great rewards,” says Gottlieb. “I’d just encourage people not to hide out from winter, but to embrace it.”

Below: Ice climbing in Platte Clove in February 2015. Photo via the Alpine Endeavors Facebook page. 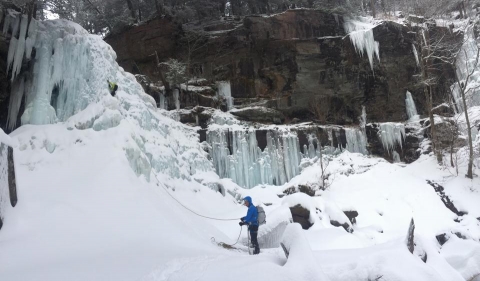