Karen and Jake Fairbairn, the owners of the Arkville-based "cow-to-cone" gelato maker Lazy Crazy Acres, announced in a blog post on Tuesday, June 16 that they are shuttering their gelato business.

The Fairbairns have run Lazy Crazy Acres since 2010. (Read our interview with them from 2012.) They are part of a new generation of Catskills dairy farmers attempting to keep their family farms going in an era of low milk prices by making "value-added" products with their milk. For them, farming came first; the gelato was a way to support their "farming addiction."

Yesterday's announcement sheds a grim light on the hope that value-added products will save many ancestral Catskills dairy farms.

Despite an appearance of success -- last year, Whole Foods in Albany began stocking their gelato -- the Fairbairns struggled to make a profit from their product.

In their blog post, they describe how they "chased the wholesale dragon:"

If we could just grow! If we could just grow then the economy of scale would work out. The profit margin would be there. It never happened. We’d get into some big known chain and have to spend $8000 to make sure we had enough of everything to fill their order and then they’d drop us out of nowhere after only launching us into one actual store. We had not one but two middle men because no one comes waaaay up here to pick up product for distribution. So our product would hop truck after truck and everyone would get a cut. We’d drop prices until we were making literally nothing. If we could just grow, it would all work out ... But the bottom line is that we could never find a way to make a living making the product the way we thought it should be made… fresh local ingredients, handmade, directly sourced, honest. And making them in the location we are in. We were going to have to join the rat race and be really slick with our marketing. And to top it all off…. We weren’t even farming anymore.

The failure of Lazy Crazy Acres gelato isn't proof that other Catskills dairy farms can't innovate their way into a profitable future with value-added products. But it shows exactly how difficult it is to do it.

Which is all the more reason to support your local family-run dairy farms that are making value-added products like cheese, milk and butter. Six of them -- Betty Acres in Delhi, Bovina Valley Farms in Delhi, Byebrook Farm in Bloomville, Cowbella Creamery in Jefferson, Dirty Girl Farm in Andes and Sherman Hill Farmstead in Franklin -- are hosting an open house creamery tour this Sunday, June 21, from noon to 5 p.m. Show them your support: pay a visit, buy some cheese, butter and milk, and tell them you want them to keep farming.

Below: Jake and Karen Fairbairn in 2007, the first time they sold gelato. Photos via the Lazy Crazy Acres Facebook page. 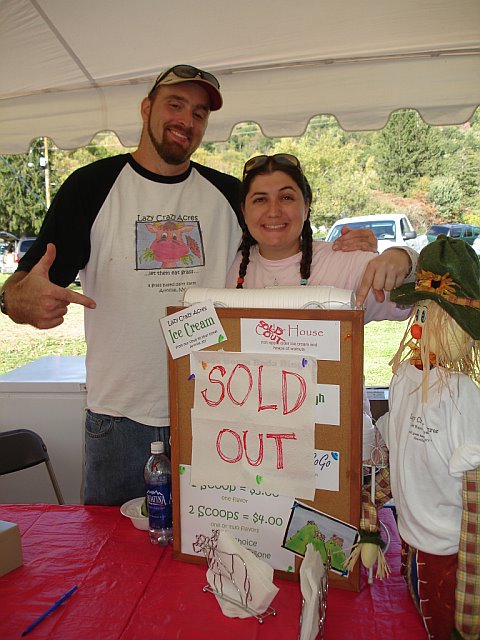