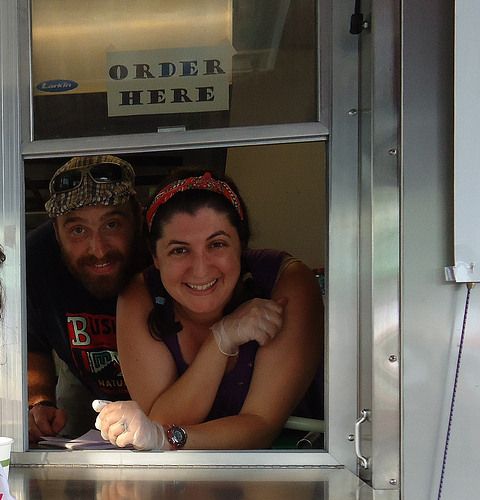 The Lazy Crazy Acres recipe for ice cream is deceptively simple: Start with a cow.

Meet small-batch gelato makers, dairy farmers, and owners of Lazy Crazy Acres, Karen and Jake Fairbairn. Last year, with the help of their farming neighbors, Chris and Judy DiBenedetto, they started their "cow-to-cone" operation, the only one of its kind in New York State.

For this egg-cracking, flavor-inventing pair, the churning never stops. I spoke with them recently from their car which they'd parked down the road from the creamery to get cell service. As the snow fell outside the car, Jake weighed in while keeping an eye on the timer (apple cobbler, one of their best-selling ingredients, was in the oven) and Karen chatted efficiently in order to keep to a schedule that includes tending cows, making waffle cone batter, hand-writing labels for ice cream cartons, shopping for sugar and butter, researching, attending conferences -- and perhaps the mother of all tasks, doing hours and hours of dishes.

WP. Everyone must think you have the dream job. What misconceptions do most people have about the realities?

Karen: They imagine that we set out to do this, that it was our primary goal. But foremost, Jake and I want to be farmers. The reality is that if you want to farm, you need something to go along with it. And that's especially true if you're dairy farming. You can get really big and sell commodity milk, but that's not what we want to do. We partner-farm and the way that we do this fits with our values and is true to Jake's past here since his family has been farming here for generations. Another misconception is about the setting. I have to tell you, there's not a whole lot of pretty here. The farm is butt ugly at this time of year and the creamery is sterile and utilitarian. Oh, and it's 13 feet square.

WP: So, how did you get started?

Jake: I'd known since college that I'd probably need a product. I took the dairy farming course while I was at the University of Wisconsin. Originally, I figured I'd make yogurt.

Karen: But then several years ago, we thought about ice cream. At first, we played with making it in a Cuisinart. Not a great idea. But SUNY Morrisville has a creamery on their property and they will work with farmers who are trying to make a product so we traded some labor and, at a very low cost, we were able to learn to make ice cream. As valuable, though, was talking to people there, including Dave Evans of Evans Farmhouse Creamery. They've been doing this for awhile and had a lot of great advice. At first we thought we'd put in a creamery at the farm but the equipment was so massively big. It's really made for large-scale operations and we had no desire to be that big. Then, flash-forward to the fall of 2010, when New York State approved some having some small creameries. We had our eyes on a micro dairy system and it allows us to make three to thirty gallons at a time. So, we can take stainless steel milk cans directly from the cows, drive seven miles, pour it in our pasteurizer and make the ice cream.

Jake: Our thinking is that when you read a flavor's name, you should know you're going to like it. So, Apple Cobbler tastes like, well, apple cobbler. It's comforting. It's familiar. And our most successful flavor, sales-wise, is Maple Walnut. It's a flavor that the older generation remembers and the younger generation hasn't really had before. And we use local maple syrup to make it.

Karen: But what sells well depends, in part, on where we're selling. At the Pakatakan Farmers' Market, we might sell barely three scoops of Chai Spiced Chocolate. In Woodstock, we sell the heck out of that flavor. I think our point is that we appreciate the idea of boutique flavors like cognac-soaked goat-cheese fig ice cream but you need a big city and a huge customer base for that sort of thing.

Jake: Right. We don't mess around with weird asparagus flavors. We're going to give you Hudson Valley Honey. You hear the name and you know what you're in for.

Karen: This will be true of the new ButterScotch flavor, too. Jake just drove to his brother's house to get this great scotch and allow me to remind you that the Fairbairns are Scottish. So, that's our approach: Flavors that are true and recognizable. And names that are relate-able.

WP: Do you ever get sick of ice cream?

Jake: Definitely. Before this, I could eat a pint a week. Now, after a long day of ice cream, I'm lookin' for some protein.

WP: What most satisfying to you about what you're doing?

Karen: We're 100 percent committed to keeping farms in families. We've had a lot of wealthy investor types come by because they love our ice cream. And let us be perfectly clear: We do not want to be the next Ben & Jerry's. Our entire philosophy and mission is to personally raise the cows and use ingredients from a small radius. We're two steps beyond the small artisan ice creams that are coming out of the city.

I'm not saying this to say we're better. I'm saying we're fortunate. They're buying their dairy from small creameries, which is great, but we are the creamery. We start with raw milk from our grass-fed cows. And we're the only place in New York State doing that. The inspectors didn't know what to do with us. For that reason, we're the proud owners of eleven separate sinks that came as part of a requirement. We also have a stove in the creamery that's approved for the apple cobbler that goes in the ice cream but not approved for, say, apple cobbler that would be served on the side. The latter would have to be baked in the trailer.

Karen: Right, we think of it as an airstream but the manufacturer says to call it platinum. It gives us more commercial kitchen space — and it moves. So we use it to transport and sell our ice cream at farmers markets.  Cool, right?

WP: So, now that you've been up and going for eight whole months, what can you say you've learned?

Jake: Everything takes twice as long and costs twice as much money as you expect.

And with that, he hops out of the car. The timer is beeping. It's time for the apple cobbler to come out of the oven.

Want to visit Lazy Crazy Acres yourself? The farm is hosting an open house from 12 noon to 4pm on Sunday, March 4. If you're lucky, you may get a taste of one of their new flavors: The Classic, swirled with ribbons of local artisanal chocolate from Fruition Chocolate in Shokan, or Bourbon Barrel Maple, made with maple syrup aged in Tuthilltown whiskey barrels.

Below: A Flickr slideshow of photos from Lazy Crazy Acres. Click on a photo to read the caption.