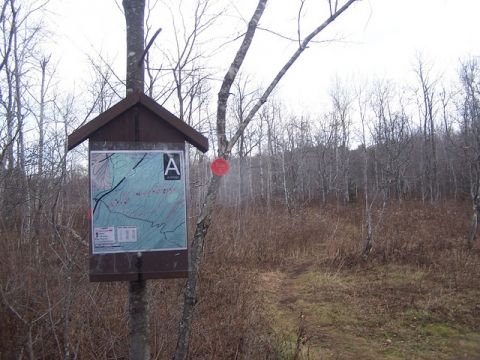 Above: A map of multi-use trails at the beginning of the Elm Ridge Trail in the Elm Ridge Wild Forest in Windham in 2011. Photo by Andy Arthur, via Flickr.

Mountain biking, hiking, snowshoeing and cross-country skiing are getting so popular in the Greene County town of Windham that the New York State Department of Conservation wants to build more multi-use trails in the Elm Ridge Wild Forest, a wilderness area in the eastern escarpment region of the Catskill Park.

The plan would add four miles of biking, cross-country skiing and hiking paths to 11.9 miles of trails -- known as
"Fun Loops" -- that the DEC installed in the area in 2009, bringing the total trail mileage up to 16 miles. The DEC also wants to evaluate 2.8 miles of unauthorized trails which have developed in the Elm Ridge Wild Forest due to increased use of the area.

The proposed plan also suggests new signage to clear up confusion about the rights-of-way on the trails and suggests moving a portion of the Long Path trail to "avoid problem sections."