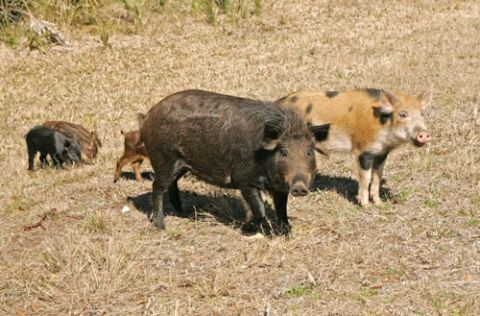 Above: Wild boars. Via the New York Department of Environmental Conservation.

The owner of a Hancock hunting preserve must destroy his herd of illegal Eurasian boars by March 31 or face a $10,000 fine from the New York State Department of Environmental Conservation.

Sixty-six-year-old Zbigniew Truniarz owns Pond Ridge Hunts shooting preserve in the Delaware County town of Hancock. He also owns another location in the Sullivan County town of Bethel, according to newspaper reports.

Last year, when DEC officials inspected the Hancock Pond Ridge Hunts location, they found 40 to 80 boars, including many piglets, in violation of a new anti-boar breeding law, according to a Jan. 30 consent order. The consent order does not mention Truniarz's Bethel property.

Zbigniew Truniarz’s boars are infamous for their habit of breaking out and destroying property. Last summer, a pack of his boars, several of them pregnant, ran amok in Bethel. Truniarz’s Hancock neighbor, Peter Andersen, keeps his German sniper rifle at the ready to shoot the pigs that regularly escape from the Hancock game farm to root up the fields of his farm. In 2011, Andersen killed eight hogs in one night, according to the Times Herald-Record.

In other states, like Texas, wild boars are an unstoppable "aporkalypse" that causes millions of dollars of destruction every year. They can be vicious and destructive, rooting up fields and forests, spreading disease and killing the occasional dog or fawn.  Wildlife officials and regulators don’t want the same thing to happen in New York, where feral pigs arrived in 2008, their presence probably linked to private hunting preserves like Pond Ridge Hunts. Truniarz’s game farm is likely the home of the one of the few breeding populations of wild boars in the Catskills, according to a 2012 USDA report

Since October 2013, it has been illegal to breed or release boars in New York, and in April 2014 hunting free-ranging boars also became illegal. On Sept. 1, 2015, it will become a crime to hunt boars on private game farms or to possess them at all in the state. Last year, the U.S. Department of Agriculture used helicopters to track feral swine in the Catskills around Truniarz's farm.

According to a DEC consent order issued on Jan. 30, Truniarz must prevent his boars on his Hancock property from breeding, and he has until March 31 to destroy his entire herd. If he does not, he'll owe $10,000 in fines, and the USDA and DEC will sweep his land to shoot all remaining feral pigs.

Truniarz's boar-destruction program is the same as his normal business plan: He invites hunters to his land to shoot the wild pigs.

“We plan to inspect the farm sometime after March 31 to determine if he has complied with the terms of the order,” said Rick Georgeson, the public information officer at DEC’s Region Four office. “At this time, we have no proof that he has destroyed the boars.  However, he has informed us verbally that he has been making progress with destroying the boars through on site hunts.”

Truniarz said on Friday, Feb. 13 that he has about 50 wild boars left.

He told the Watershed Post that he’s not sure he’ll be able to kill all his boars by the March 31 deadline, because of the deep snow that has buried the Catskills.

“The problem is that we can’t shoot right now; the snow is too deep,” Truniarz said. “Last week, my hunters cancelled. If the snow melts quickly, we can hunt.”

Truniarz has kept and bred wild boars as game on his property for 10 years, he said. Because boar hunts make up 90 percent of his business, the new boar ban will force him to close Pond Ridge Hunts, he said.

Truniarz said that he doesn’t believe that the boars damage the environment or property.

“I’m from Europe, from Poland,” he said. “There, the wild boar helps grow the forest, eats insects, and makes the forest healthy.”

Correction: A previous version of this story mistakenly stated that it became illegal to possess wild boars in New York on September 1, 2014. In fact, it will become illegal to possess them on September 1, 2015. (See the law here.) The story also stated that Long Eddy was a hamlet in the Delaware County town of Hancock, when it is just over the county line in Sullivan County. I've also added some clarifying information about Truniarz's property in Bethel.