For young Walton filmmakers, CMFF is just the beginning 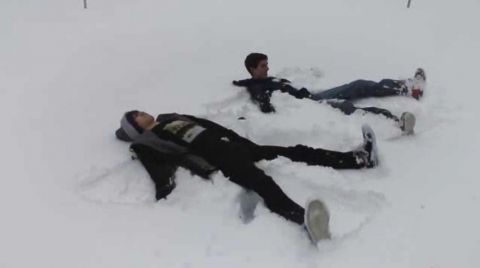 Eric Webler pulled his buddy’s van into the McDonald’s parking lot and began editing what would become an award winning film.

Webler said he was 10 years old when he got his start in filmmaking after gaining a sizable following on YouTube from his stop motion videos of toys cars.

Seven years later, Webler, 17, is part of a crew of five Walton teenagers who produced the music video “Imaginary Friends.” In May, the video won a coveted “Catty” award for best high school music video at the Catskill Mountains Film Festival (CMFF).

Music by artist Laszlo is the backdrop for the video that tells the story of a lonely kid’s adventure.

Fifteen year-old Devin Hulse portrayed the lonely kid — a recluse who wanders the bare, snow-banked streets in search of excitement.

He finds fun in the form of a friend, played by Ricky Wood 16, who seemingly pops into existence. They venture off until confronted by two bullies, played by Webler and Robbie Phraner, 16.

The footage is edited to convey the new friend is of the lonely kid’s imagination. He fades in and out of scenes — pushing the lonely kid on the swing in one shot, but gone the next.

“I look for ways to make really smooth and clean transitions,” Webler said.

The group of five worked on the video in February, after hearing about the CMFF from a school advisor and decided to enter.

They shot most of it in a local park. Webler said filming outside created some flexibility and allowed for a wider variety of shots.

It took Webler five hours to edit the five-minute video, most of which he did in fellow director Dan Cucciarre’s van. “Imaginary Friend” was one of 102 films that screened at the first CMFF held in May.

The CMFF, based in Delhi and sponsored by SUNY Delhi and the Greater Delhi Area of Commerce, takes submissions from across the world, but their focus is on local films.

A part of their mission is to provide a forum for regional filmmakers to discuss their craft.

Film festival chair Jessica Vecchione said she believes nurturing young and local talent is important, which is why the major focus of the festival is to expose them to more experienced filmmakers, granting a space to learn and network.

“Delaware County is a very rural part of the state, and while we have a good number of established filmmakers that live and work here, they're all spread out across a region as large as Rhode Island,” Vecchione said. “A weekend each year, devoted to bringing our regional filmmaking community together with the larger filmmaking community at large is a wonderful opportunity for all of us.”

Phraner said it was an opportunity that made him feel “that much more inspired.”

“We were up there with winners from the U.K. and Illinois,” Webler said. “It feels good to be acknowledged.”

Studio Van Productions gets a name – and a mission

When asked at the festival their collective name, the Walton filmmakers didn’t have an answer.

They’ve unified under the name Studio Van Productions — an ode to Cucciarre’s van where they came together to create the video.

“This went further then any of us expected,” Hulse said.

With their newly branded van logo, the group is looking to drive forward with new film endeavors that extend into other interests, including another music video and a short comedic documentary.

To help fund those projects they have started a Go Fund Me page with an ultimate goal of $7,500.

Studio Van Productions can be found on Facebook and GoFundMe. Other winners and updates from The Catskill Mountain Festival can be found on the film festival's website and Facebook.

Below: The team that produced the video, now known as Studio Van Productions. Photo by Dan Cuccuarre. 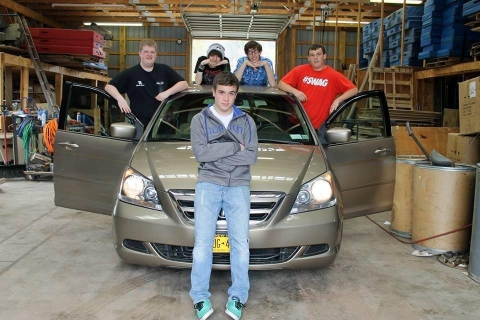 More than a funny girl: "One Night With Fanny Brice" at the Open Eye Theater

This weekend: Blithe Spirit at the Franklin Stage Company