This weekend: Blithe Spirit at the Franklin Stage Company 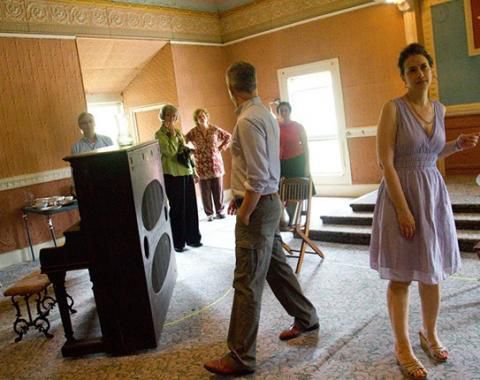 Tonight, the Franklin Stage Company begins a run of arch drollery and finely turned phrasing with a free production of Blithe Spirit, a 1941 play by Noel Coward.

The plot centers on Charles Condomine, a novelist who moves about British high society with ease until an attempt to conjure material for his next book also conjures up severe paranormal distress. Thinking that hiring a medium — one Madame Arcati — will help him to explore the occult from a safe distance via a séance, Condomine instead gets reacquainted with his deceased — and extremely temperamental — first wife, whom only he can see.  His current marriage is soon in jeopardy as Condomine discovers that the spirit world is something like a genie that refuses to return to its bottle.

Aficionados of acid wit and send-ups of British mores will find much to savor, the press release touting the show promises:

Noel Coward is revered for his sparkling dialogue,” says FSC Executive/Artistic Director Carmela Marner. She continues, "While there is of course no shortage of wit and wild hilarity in BLITHE SPIRIT, director Anton Dudley and I both find the play equally fascinating in its exploration of inter-personal relationships and the magical nature of human connection."

Blithe Spirit’s irreverence is all the more striking in historical context: Coward wrote it after his London apartment was bombed out during the Battle of Britain. He figured that audiences would appreciate a pure flight of fancy during dark times.

The FSC production will feature both established players and newcomers.  Prominent among the latter is Agelina Fiordellisi, a former artistic director for the Cherry Lane Theatre, a Greenwich Village institution.

Those hoping to make an evening of the entertainment have a special dining option on Wednesdays and Saturdays.  From 6 to 7:15pm, Fokish Farms, a regular presence at the Franklin Farmers Market, will serve a light sit-down dinner on Chapel Hill, featuring soups, salads and breads for $10.  The dinner is not a function of the FSC production, so separate reservations (607-829-2721) are encouraged.  Those who prefer to dine indoors can find a table at Home Town Pizza (607-829-2711).

More than a funny girl: "One Night With Fanny Brice" at the Open Eye Theater

For young Walton filmmakers, CMFF is just the beginning