Windham was home to Nazi summer camp in 1937 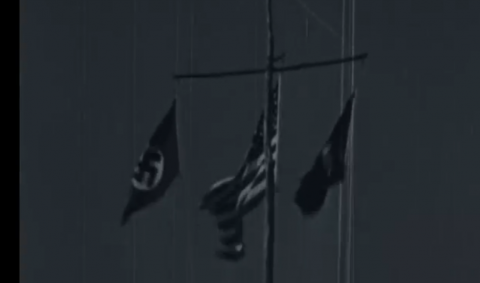 Above: "Volks-Deutsche Jungen in U.S.A.," a film by the Deutsche-Amerikanische Berufsgemeinschaft (DAB) about a DAB Nazi summer camp for boys in Windham in 1937.

In the summer of 1937, the Greene County town of Windham was home to a Nazi summer camp, according to archival film footage released by the National Archives Motion Picture Preservation Lab in July.

The film, titled "Volks-Deutsche Jungen in U.S.A.," depicts scores of boys from New York City setting up a summer campsite in a bucolic field in Windham. They exercise, play games, and salute flags emblazoned with Nazi swatiskas and Hitler Youth lightning bolts.

The camp was part of a series of summer camps run in the U.S. in the 1930s by the Deutsche-Amerikanische Berufsgemeinschaft (DAB), a U.S.-based group that promoted Germany and the Nazi party in America, according to the National Archives.

The film came as a surprise to Patricia Morrow, Windham's town historian, who had never heard of a Windham-area Nazi summer camp. But summering in the Catskills has been a long tradition, and some summer hosts in the Windham area were once openly anti-Semitic, she said.

"Someone probably rented their property to a group for a boys summer camp and didn't bother to ask too many questions about the organization, or perhaps they did know and were sympathetic to their agenda," Morrow wrote in an email to the Watershed Post.

"Many resorts and boarding houses in this area openly stated 'No Hebrews Taken' in their ads," Morrow wrote. "When forced to remove that phrase they switched to 'Churches Nearby' in an attempt to convey the same message in a less offensive manner."

Even the location of the Nazi summer camp is difficult to pinpoint, Morrow said, because the landscape of Windham has changed since 1937.

"The elevation suggests to me that it could have been between North Settlement and Mitchell Hollow, off County Route 10," she wrote.

Summer getaways for wildly different ethnicities, religions, and agendas have dotted the Catskills for generations. Christian groups, Hasidic Jewish communities, and Polish and Irish expatriates all have a long history of sending their children to summer camp in the mountains.

But Nazis are a new one, at least to us.

According to Audrey Amidon, who wrote the article about the film at the National Archives, the summer camp in Windham was part of a nationwide effort by the DAB to "instill Nazi sympathies in German-American children:"

"Even though it happened more than 75 years ago, it’s unsettling to see American children raise a Nazi flag and know that it occurred just 150 miles outside New York City," she wrote.

Amidon notes in her article that the film about the Windham camp appears to have been projected so often that the original film stock is heavily scratched. A history columnist at Slate suggests that perhaps the film was shown for recruitment purposes.

Greene County historian David Dorpfeld did not respond to a call or an email for comment on this story.

The men who would be Guv
Godwin's Law applies to county board meetings?