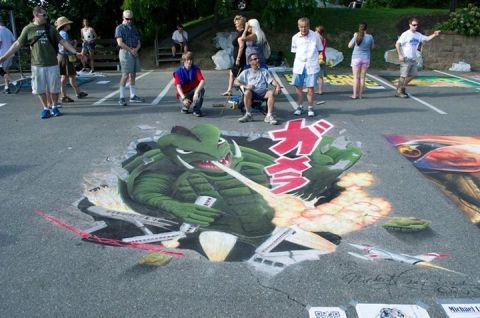 This weekend, Mike La Casas will create an entire galaxy, complete with stars, planets, rings and meteors. And by Monday, it will most likely be gone.

La Casas, 53, has been composing chalk drawings of galaxies, animals and dinosaurs since he first heard about street art on a radio segment 20 years ago.

On an impulse, he picked up some chalk that day, and still hasn’t stopped.

He said the impermanence of chalk art is part of its allure — it’s what makes it a distinct medium.

And because these pieces of art are fleeting and temporary, unlike other visual artists, chalk artists craft their work for an audience.

“There’s no studio that will let you watch an artist paint,” La Casas said. “This is unique.”

La Casas said he likens street art to performance art, because watching someone create the piece, and the banter between audience and artist, are just as much a part of the experience as appreciating the finished product.

Everywhere he chalks, La Casas said he’s asked, “What happens if it starts raining?” And to that, he said, he shrugs and says that it wasn’t meant to last forever, to be taken home or hung on a wall.

“You can’t take the ballet home, why would this be any different?” La Casas said.

Lipstein said each year she would come back from Sarasota inspired by the incredibly intricate images artists were able to depict with chalk — but frustrated that photographs of them never seemed to stir the same excitement or appreciation from others.

So she brought a chalk festival to New Paltz so that people from all over the Hudson Valley can be there to witness it first-hand.

Beginning Friday and lasting throughout the weekend, professional chalk artists from across the country will be creating a total of 19 pieces, each on 10-by-10-foot squares, on the upper parking lot of Water Street Market.

Many of these professional artists know each other well from frequenting various chalk festivals all over the country.

Unlike larger fests with hundreds of traveling participants, New Paltz will host just 21 out-of-town artists this weekend. The smaller size of the fest contributes to the camaraderie, La Casas said.

Lisptein said the festival is also about exposing locals to street art. This year, 16 local artists, up from just two the first year, will be creating a total of 14 pieces on 8-by-8-foot squares.

Chalk and 1-by-1-foot squares will also be available for passersby who have the urge to start drawing.

Lisptein has also invited the non-profit group Arrive Kenya, which raises awareness for street children in Kenya, to table and raise money at the event over the weekend.

To help raise awareness for the organization's cause, five of the street artists will be drawing portraits of street children from Kenya this weekend.

The 2014 Hudson Valley Chalk Festival takes place at Water Street Market in New Paltz from Friday, July 18 through Sunday, July 20. The event is free, and will feature live music. More information about the festival can be found on their website or Facebook page.