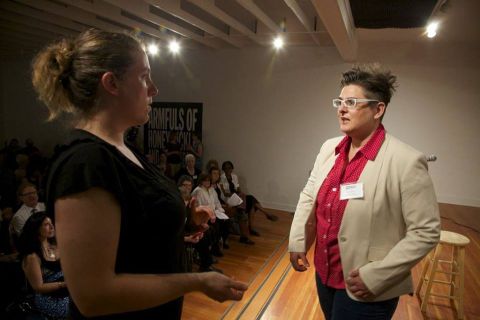 "I had constructed these pants when I was in one of my nuthouses," Joanee Tarshis says in a video produced by the TMI Project. "I had been refusing to make a wallet in occupational therapy. Only crazy people make wallets."

Stories like this, from mental health patients, at-risk teens, and domestic violence survivors, are the heart of "Voices in Action," a monologue show produced by the TMI Project that comes to the Rosendale Theatre on Tuesday, July 29.

It's the latest in a string of productions from collaborators Julie Novak, Eva Tenuto, and writer Sari Botton, who began working with the Ulster County United Way's Project HOPE initiative in 2010 to help Ulster County locals tell their deepest, darkest stories in live performances inspired by Eve Ensler’s "Vagina Monologues."

The concept is simple: Everyone has a story they’re scared to tell, and finding a way to tell it can be deeply transformative. The TMI Project workshops those stories in a safe environment under the guidance of experienced writer Botton, and then Tenuto and Novak transform the results into a crowd-pleasing monologue.

“People come into the workshop, and they have a belief that if we know something about them they will be unlovable,” said Tenuto. “This belief has stopped them from living fully. They face it instead of running away from it, start to become who they are instead of who they think they should be, are generally received with adoration instead of shaming, and move on to have fuller, happier lives."

Tenuto says the TMI Project format adapts well to just about any population: “​First and foremost, we establish the room as a safe space. We have created a list of guidelines and agreements that set the tone… As people start to open up, they create bonds with their peers."

"Truth-telling is contagious," she said. "One person tells a story that others relate to, others feel they have been given permission to share their experience too."

“It's been particularly satisfying bringing the workshops to [the people] we’ve worked with through our Community Outreach Initiative,” said Botton. “These people tend to need the outlet we provide in a big way. Walls come down between even former teen ‘enemies’ when they hear each other’s stories and feel heard by their peers.”

Jane Demuth, who first got involved with TMI Project three years ago, credits it with changing her life by helping her change her gender identity.

“I'm a little over a year into gender transition right now," she said. "I let the cork out of the bottle with my first piece, and I had no idea how much more that bottle held.  The work I've done with TMI, and the incredible support of my fellow participants and audiences, helped me find the courage to admit to myself that I wanted to transition, and the courage to make that happen.”

"Voices in Action" sold out the Kleinert-James in Woodstock last month, to standing ovations and rave reviews.

“Voices in Action is one of the most compelling theater pieces I’ve ever witnessed,” said Stacey Rein, president of The United Way of Ulster County. “It’s funny, poignant, inspiring, educational, and therapeutic - not just for the participants, but for the audience as well."

The project is growing. A less-formal spinoff, the TMIdol Story Slam, has become a pub classic. This summer, the group achieved official 501(c)3 non-profit status and won the Ulster County YMCA’s Organization of the Year award. And if that weren’t enough to celebrate, co-founders Julie Novak and Eva Tenuto got married in July.

Proceeds from "Voices In Action" will be matched by funds from the Australian-based Macquarie Group Foundation, and used to continue to bring TMI workshops to marginalized populations; the hope is to include military veterans, cancer survivors, and teen moms.

The group has plans for a workshops and retreats throughout the fall in the Hudson Valley and in Provincetown, and is helping produce a full-length show at the NYC Fringe Festival called "Tales of Geriassic Park; On the Verge of Extinction - A One (Older) Woman Show by a Sit-Down Stand-Up."

Below: A promo for "Voices in Action," a TMI Project presents the Community Outreach Initiative Programming Showcase.

Saving the Rosendale Theatre
Who knew toast was so exciting?