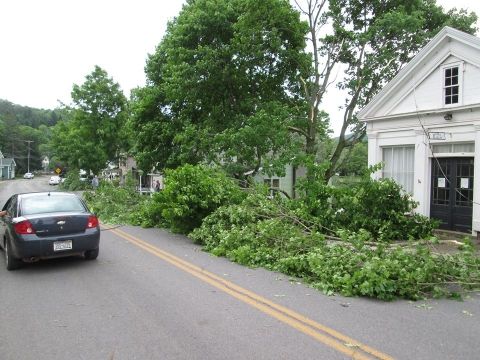 A storm with winds in excess of 60 mph that swept through Delaware County early this morning has left thousands without power, according to New York State Electric and Gas Corporation (NYSEG).

The storm was brief, beginning at midnight and lasting roughly 20 minutes, but caused major damage, especially to the towns of Bovina and Delhi, according to Director of Emergency Services and Fire Coordinator for Delaware County Steve Hood.

Hood said the storm resulted in a large number of fallen trees throughout the area and sections of two roads in Delhi — Federal Road No. 2 and Glen Burnie Road— have been blocked off because of it.

The NWS warned that the line of thunderstorms found by the doppler radar were capable of producing quarter sized hail and damaging winds.

The warning was extended to 1:30 a.m. for parts of Delaware and Sullivan Counties.

At 1:14 a.m., the NWS Binghamton issued an urban and small stream flood advisory effective until 4:15 a.m. for Delaware County.

Bovina resident Jillienne LaFever, who is without power, said the storm came through between midnight and 1 a.m., when she thought her “house was going to blow away.”

According to NYSEG, approximately 1,500 of its customers in Delaware County are without power.

That number is down from the approximately 2,668 people, who were reported by NYSEG to be without power around noon.

Three quarters of Bovina households, 283, are without power, 257 in the Town of Andes and 42 people in Delhi.

Power outage updates can be found on the NYSEG website map.

Editors note: In a previous version of this story, Steve Hood was incorrectly referred to as Steve Wood and was misquoted as saying minor damage when it was "major" damage.

Below: Branches and trees down on Maple Avenue in Bovina. Photo by Ray LaFever. And a map of power outages in the Catskills region, Delaware County is shaded in red, showing there are over 1,000 customers without power. Photo Courtesy of New York State Electric and Gas.

Update: Below, another photo of the destruction in Bovina. Photo taken by Kevin Rossley on June 18. 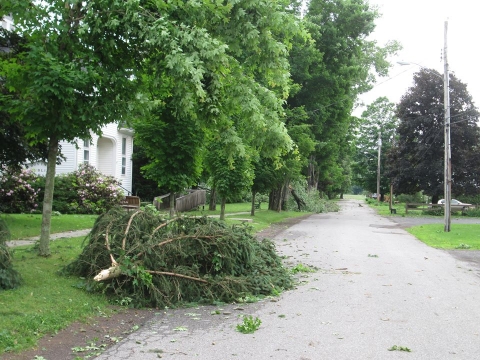 Brace yourself for wind chills as low as 40 below