Reinforcement of the Gilboa Dam is complete 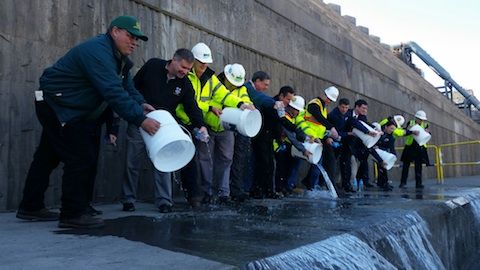 Photos and video by Julia Reischel.

State bigwigs and local officials doused the massive new concrete spillway of the Gilboa Dam with buckets of reservoir water on Friday, Oct. 31 to celebrate the completion of the dam's $138 million rehabilitation project.

"We are serious about public safety," said New York City Department of Environmental Protection Commissioner Emily Lloyd at the ceremony. "This was a safety project foremost."

After flooding in 1996 broke a record for the amount of water that overtopped the dam, the NYC DEP found that the structure, built in 1927, might not withstand similar floods. The agency embarked upon a $138 million reconstruction project to increase the dam's flood resistance and to protect residents downstream in the Schoharie Valley.

Below: New York State Senator James Seward speaks at the ceremony on the Gilboa Dam's spillway. Behind him are the massive concrete steps of the dam, which are topped with vertical crest vanes. Both the crest vanes and the steps are designed to reduce the force of water as it goes over the spillway. The gray pipes on right are the temporary siphons that drain the reservoir, which will eventually be replaced by a permanent release tunnel.

"Imagine having this dam give away, and sending a tidal wave" down the Schoharie Valley, said New York State Assemblyman Pete Lopez, who represents Schoharie County.

Since 2006, the DEP has installed 234 million pounds of concrete and 80 anchoring cables on the Gilboa Dam. The dam can now withstand floods that are more than two-and-a-half times more powerful than those cause by Tropical Storm Irene, DEP engineers said at the ceremony.

The anchoring cables were already installed when Irene sent eight feet of water over the top of the dam in 2011. DEP officials credit the anchors with keeping the dam intact through the historic flood. They say that now the dam will withstand up to 15 feet of water over its spillway.

"I'm so happy those 80 anchors were in place during Hurricane Irene," said Tony Van Glad, the chairman of the Schoharie County Board of Supervisors, during his turn at the podium. "The Schoharie Valley is safer than ever."

In his remarks, James Tierney, the assistant commissioner of water and watersheds at the New York State Department of Environmental Conservation, recalled sitting in his office in Albany during Tropical Storm Irene and hoping desperately that the Gilboa Dam wouldn't break.

"The dam held," he said. "We survived, and we're building back better."