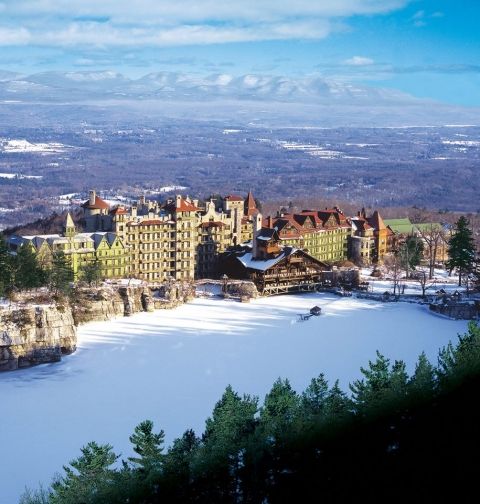 In the last few weeks, the owners and staff of the Mohonk Mountain House in New Paltz have weathered the outbreak of a nasty gastrointestinal virus, a week-long closure, the stem-to-stern disinfection of the entire resort by a 200-person cleaning crew, and even a rude Twitter hashtag.

This week, Mohonk faces another setback: A lawsuit filed by two New Jersey residents who claim Mohonk management knew a norovirus was spreading around the resort, and did not warn incoming guests to stay away.

The plaintiffs in the suit are Louis and Anna Marie Bellotti of Fort Lee, New Jersey, the Daily Freeman reports.

In the lawsuit -- posted on Scribd in full by the Freeman -- the Bellottis are seeking to bring a class-action suit on behalf of themselves and other Mohonk patrons. The Bellottis claim that there are over 200 people who may have gotten sick after visiting Mohonk in January or February, or who contracted the norovirus from a Mohonk guest.

The Bellottis are represented in the suit by attorney Donald Boyajian, an Albany personal injury lawyer who has brought similar suits before, including a class action lawsuit against Six Flags Great Escape in Queensbury, NY after a 2008 norovirus outbreak that sickened over 600 people. The Mohonk lawsuit seeks unspecified compensation for what Boyajian calls "gross negligence, recklessness and/or wantonness" by Mohonk management during the outbreak.

After many guests and staff came down with a fast-moving stomach bug, the Mohonk Mountain House voluntarily closed down from Feb. 7 til Feb. 14, and hired a 200-person sanitation crew from disaster cleanup company BMS Cat to disinfect the entire resort. It was the first closure in Mohonk's 145-year history, the Freeman reports.

Nina Smiley, Mohonk's director of marketing, told the Watershed Post that she could not comment on the Bellottis' lawsuit.

"We're not able to comment on a legal matter," she said. "I just want to assure you and others that the Mountain House has been completely and thoroughly cleaned by a company that specializes in this area. We are pleased to be open, and our focus is on making sure that our guests enjoy their stay."

A family-owned 259-room Victorian resort perched atop the stunning Shawangunks, Mohonk is an icon in the region, and beloved by locals and tourists alike. Many Mohonk guests and friends of the Smiley family have left encouraging messages on the resort's Facebook wall in the wake of the outbreak.

In an essay published today in the New Paltz Times, Susan Slotnick writes that no mere virus can destroy Mohonk's magic:

By all accounts the norovirus is the worst event to ever visit the paradise, but like all adversity, the place will only be better for having survived it. Like much in life it is easy to take for granted what has always been there. The monolithic tower looking down on the valley reminds me of a lighthouse amidst an ocean of people. I know I am home when I see it.