High art: Balloon sculptures made for the Guggenheim soar in Catskill 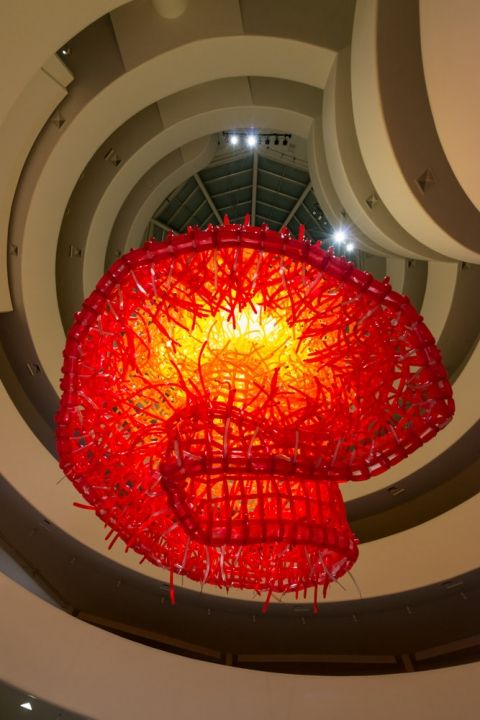 Above: Jason Hackenwerth's Aviary in its original form, as a one-night installation made for a gala at the Solomon R. Guggenheim Museum in Manhattan. Photo by Kristopher McKay.

Latex balloons are generally considered to be more the stuff of children’s birthday parties than of high art, but one sculptor is out to put a pin in that idea. Jason Hackenwerth’s buoyant works, which are touching down in Catskill this weekend, look past the common balloon’s reputation to its transcendent power as an artistic medium.

Sinuous and colorful, Hackenwerth's sculptures can call to mind anything from exotic sea flora to alien life forms. Now, as part of Catskill’s Masters on Main Street program, three of his creations are touching down in locations throughout the town in a free exhibition called Aviary: Reimagined.

“The commonality of that material is so accessible and so easy to understand,” says Hackenwerth of his chosen medium. “Instead of people being frightened of the work, as a lot of people are for contemporary art, they seem to be joyous and happy.”

The original Aviary was a single, 6,000-balloon piece that hung for one night only in the Guggenheim Museum’s rotunda to fete the 30th anniversary of the Works & Process performing-arts series. The birdcage-like sculpture was slated to move to Jersey City’s Mana Contemporary culture center after that, but the plan fell through.

That’s when Works & Process’s general manager, Duke Dang, had an idea. The part-time Catskill resident approached Masters on Main Street director Fawn Potash and the Greene County Council on the Arts with the idea of bringing Aviary to the village. The plan was set in short order, and the day after the April 2 gala, Hackenwerth’s piece made its way upstate.

“It all came together very fast. It was very much shooting from the hip,” says Dang. “It’s a work that’s transportable, but also makes a large impact.”

Above: A piece of Aviary: Reimagined hanging in the Bridge Street Theatre in Catskill. Photo by John Sowle.

With the help of Potash and local volunteers, Hackenwerth’s assistant, Leah Blair, reconfigured Aviary into three separate pieces—one in the Bridge Street Theatre, one in a storefront on 404 Main Street, and one in the lobby of the Greene County Office Building. (As of press time, the latter sculpture had to be taken down due to latex allergies. A new location for the piece is still to be determined.)

Hackenwerth, who was going to pop the exhibit's many balloons following the Works & Process gala, is excited for the piece to get a second life in Catskill. “We get to reach so many more people. I’m just thrilled and honored that the community of Catskill is so happy to have the work there,” he says.

The community is getting into the spirit of the exhibition. On Saturday, April 12, Catskill's Main Street will celebrate the installation with an unveiling during the monthly Second Saturday Stroll, featuring live music, tastings and a reception at the Bridge Street Theatre. There will even be a public balloon-popping party in May, once the exhibit is over.

Last week, students at Catskill Elementary School made their own floating sculpture out of nearly 800 balloons with guidance from Blair. The piece is now hanging in the school’s cafeteria.

Above: Duke Dang, Leah Blair and Charles Rosen at the Catskill Elementary School, where students made their own 800-balloon sculpture for the event. Photo by Rob Shannon.

Hackenwerth originally started displaying his balloon pieces as guerilla art on the New York City subway, intended to break up the monotony of commuters’ mornings. There’s a similar element of surprise in the sculptures popping up around Catskill.

“While I’m putting this giant balloon sculpture up, everyone is smiling,” Potash recalls of installing one of the pieces. “I heard people saying it’s a DNA strand, it’s a millipede, it’s a Chinese dragon, it’s a hammock. People would say, ‘Oh, what’s this for?’ And I’d say, ‘It’s your birthday.’”

Above: A piece of Aviary: Reimagined at 404 Main Street in Catskill. Photo by Rob Shannon.

Aviary: Reimagined is on display from April 12–May 3 at the Bridge Street Theatre, 404 Main Street and a third location in Catskill TBA. Opening reception at Bridge Street Theatre on April 12, 12-4 p.m.; Second Saturday Stroll 5-7 p.m. Free. For more information, see the Greene County Council on the Arts website at greenearts.org, or follow the hashtag #catskillballoons on Twitter.

Arts around the Catskills this weekend