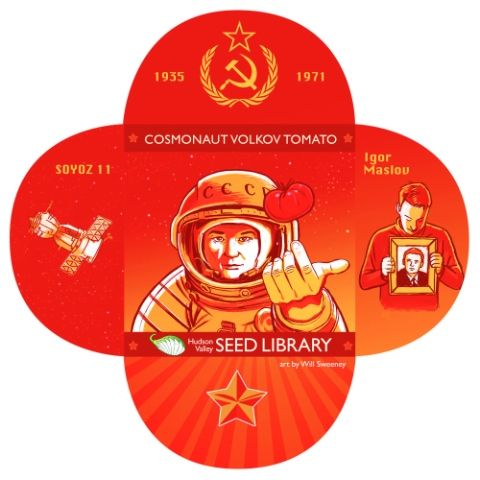 This Friday, the Horticultural Society of New York fetes a local seed company, and the artists commissioned to design its signature line of seed packs, with an opening reception at their gallery in midtown Manhattan. Local stalwarts Brewery Ommegang and Tuthilltown Spirits will be on hand to provide libations.

It's a grand event for the Hudson Valley Seed Library, a company that has grown quickly over the last few years from its humble origins as a seed-saving project in the Gardiner public library. Founders Ken Greene and Doug Muller now operate a small seed farm with an expanding line of heirloom varieties in the Ulster County hamlet of Accord, and run a seed-saving membership program for local gardeners.

In 2008, Greene and Muller began commissioning artists from around the region to design seed packs for the company. In 2009, the first year they sold Art Pack seeds, they had packs by eleven artists. This year, there are over 60 seed varieties in the "Art Pack" series.

The seed packs themselves are almost too beautiful to open, and the art is fresh and witty -- where you might expect wispy line drawings or pastel-tinted watercolors, there's Lynne Bittner's crisp, graphic take on Mammoth Long Island Dill, or Rachelle Cohen's pastiche of New York City maps for the New Yorker Tomato.

As I learned more about the modern seed industry I began to see past the airbrushed transplants and photo-shopped stills in the seed catalogs. I found that the true face of the industry was not so pretty. Many catalogs cover-up where their seeds come from, how they are grown, and who owns the brand name. Most seed companies get their seeds from large scale monocrop seed farms using pesticides, herbicides, and soil-wasting farming practices. Looking deeper I found that a few multinational corporations, mostly biotech, own the bulk of seed sources. I realized that my seed dollar spent at a familiar seed catalog, even one offering heirlooms, could very well be supporting the likes of Monsanto.

When it came time to design our seed packaging and website and figure out how to get the word out about our seeds, I knew I needed to do it differently from conventional catalogs. I wanted honesty, transparency, and to communicate the stories of our seeds.

When we first came up with the idea of using original artwork from different artists for the covers of our seed packs, some people suggested that it would be better to stick to what everyone else does, photos. But we wanted our packs to communicate something more about the seeds they hold. The artwork reflects the diversity of the seeds we grow and suggests that each seed comes with a story.

The opening reception on Friday will be at 6pm. There will also be a preview talk at 5pm; the folks at Hudson Valley Seed Library write that anyone who wants to attend the talk should leave a comment on their blog.

Get those seeds in the ground: Garden projects across the Catskills