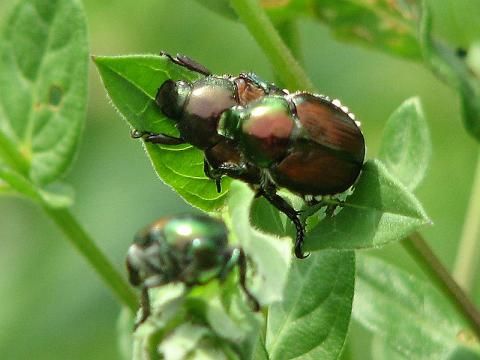 This spring I took off from my investment business, and we moved to our second home in Shokan. We’ve been summering here for over a decade, but this year was different. In place of obsessively checking my Blackberry, I set sight on cultivating the perfect vegetable garden. In lieu of 30-minute trips to the New York Sports Club between meetings, I did yoga at my leisure by the pool. Instead of returning to the City each Sunday evening for my Monday-morning partners’ meeting, I’d sit on the porch, drink red wine, see the sun set and watch the moon rise.

Nothing, it seemed, could harsh my mellow – nothing, that is until they appeared.

At first I noticed just the slightest of damage to our grapevines. Something or someone had eaten the tender top leaves, leaving skeletal veins in their wake. Next, the roses began to suffer.

I spied the little culprits: Japanese beetles by the dozens had invaded my property.

I did my homework. The Internet is rife with beetle science and blogs. Perhaps the most comprehensive and literate is “Beetles in the Bush” by Ted MacRae, a Missouri-based research entomologist with Monsanto.

As its name suggests, the Japanese beetle is native to Japan. It is thought that the beetle larvae entered North America in a shipment of iris bulbs some time prior to 1912, when US agricultural inspections began. The beetles were first found in 1916 in a nursery in Riverton, New Jersey: another important first for the Garden State. With few natural predators and a voracious appetite both for plant life and for reproduction, the beetles spread to more than 28 states, eating and mating with everything in their path. In less than a century, they reached my garden, my roses, my grapes.

As had generations of American men before me, I prepared to go to war. I picked up a half-dozen packs of Japanese beetle traps sold by the Safer Brand Company. I found comfort in the stern warning that if I or a house guest inadvertently swallowed the product, I should immediately “call the Poison Control Center,” as well as the commonsense reminder that I should “not give anything by mouth to an unconscious person.” These traps sounded sufficiently badass for my purposes.

I set the devices around the perimeter of the property. I did catch a handful of beetles, but in the end my first skirmish was less than successful. The little bastards were still munching ceaselessly on my heirloom roses.

Something else was going on: something kinky. Often one beetle, presumably the female, chomped away on our greens while a second one was mounted on her back. I wasn’t certain, but they appeared to be eating and propagating the species simultaneously – a sort of literal roll in the hay.

I decided to reach out directly to beetle blogger Ted MacRae. I wrote to ask MacRae how these creatures have sex in the first place, and whether in fact they were doing so in broad daylight on my Swiss chard. I heard back almost instantly from a man who had clearly pondered the issue in some depth:

“The mounted beetles you’ve seen are indeed mating pairs,” MacRae wrote me. “The male is the one on top, as with the vast majority of beetles, and while a couple may stay mounted for some time – many minutes – the act itself is quite brief: less than a minute.

“Females mate soon after they emerge from the ground. They spend the first part of their lives as white grubs living in the soil and feeding on grass roots, and begin laying eggs soon after that. She’ll lay 40 to 60 eggs in the first week or two of adult life, though she might live for several weeks or even a couple of months.”

MacRae went on with apparent enthusiasm, sharing a firsthand knowledge of intimate beetle life: “Both males and females are quite adulterous, mating repeatedly and showing no particular loyalty to a given partner.” And since I’d had the bad taste to ask, he addressed my question about the mechanics of beetle love. Did they, as I suspected, actually enjoy making love in my backyard?

“Yes, males have a ‘schvonzie’ and give new meaning to the term ‘woody,’” MacRae wrote me. “The organ consists of three very hard parts, made of the same material as the beetle shell, that work together to anchor the organ, actually called the aedeagus, inside the female opening and introduce the love juice. There aren’t the same rhythmic movements most humans associate with the act, but I swear I’ve seen the males quiver for a moment.”

Some may call me old-fashioned, but I take no particular pleasure in watching other species copulate. The fact that one of them would eat my bean plants while the other had its way with her struck me as the height of arrogance on both their parts.

So I went back to my area garden shop to consult the local menfolk. That’s when I first saw the Tanglefoot Japanese Beetle Trap. The man behind the counter called the Tanglefoot “the Mercedes Benz of garden protection.” His second-in-command termed it “the AK-47 of beetle destruction.”

In place of the Safer Brand Japanese Beetle Trap’s demure yellow bait-holder and sandwich-sized plastic catch bag, the Tanglefoot is a nearly foot-long contraption with a veritable bucket for the trapped bugs. I set up four of these monster traps, placing the fragrant “patented lure” in “the scientifically tapered yellow cone.”

Over the ensuing week I caught literally hundreds of guilty insects. But then I faced another problem: how to dispose of them. The smaller, less potent Safer Brand trap was equipped with an opaque plastic catch bag. One merely chucked it in the garbage and was done. The Tanglefoot, however, caught the beetles in the bottom of a reusable bucket filled with air holes. When I unscrewed the catch pail to examine its contents, I found hundreds of writhing beetles, most still very much alive. So I did something I almost never, ever do: I read the directions.

The Tanglefoot comes complete with an exhaustive instruction booklet. On the issue of disposal, the company advises ground or landfill burial following summary execution by drowning: “To kill beetles, immerse cage in water. Beetles may then be placed in garbage bags or buried.”

In addition to its matter-of-fact killing instructions, the little yellow owners’ manual laid bare the device’s awesome powers of deception. According to the text, the device lures the female beetles with the manufactured scent of fake flowers. This seemed a bit underhanded to me, but acceptable under the circumstances.

The males, on the other hand, are attracted by what the manufacturer boasts to be a “state-of-the-art sex lure that emits the scent of several thousand virgin females.” This stuck me as unsporting at best. We had earlier established that beetles are highly adulterous and get it on for most of their limited adult lives. Virgins are presumably in brief if not short supply. It seemed to me a form of interspecies spousal abuse to tease the male beetle with the promise of no fewer than thousands of virgin females, only to end their lives in a cage dunked in water. On Wall Street they call this a derivative: a secondary product based loosely upon the original, and almost invariably designed to screw somebody.

I turned again to the ever-patient Ted MacRae for guidance. This time his reply saddened as well as enlightened me. “Good question, Jim,” he wrote. “As to whether beetles find bliss or death in the bucket, sadly, it is the latter. Once the beetles are attracted to the lure and fall into the catch pail, sex becomes the last thing they can think about, as from that point on they are doomed to a frustratingly endless quest to escape. You can imagine how much fun it is when large numbers of beetles are trapped, all scrambling and climbing over one another until exhaustion or desiccation complete their demise.”

Gee, now I felt really bad. I was just trying to get rid of these insects; I didn’t mean to desiccate anybody. Not only that, in further defense of his little friends, MacRae wrote back to tell me that my traps weren’t even working for their intended purpose. To the contrary, they had been developed to lure and trap Japanese beetles in order to measure their spread across a wide expanse of terrain. Their powerful and insincere lure had the ironic effect of attracting otherwise-distant beetles from miles away to consume my garden: the moral equivalent of destroying a village in order to save it. When would we learn?

And then, just a month into my new, post-urban life, it hit me: These little folks want nothing more than to fly around and have sex all day with multiple anonymous partners. They love their families, even if they can’t remember everybody’s name. They are strict vegetarians – vegans, actually. They grew up on grass and adore it still. Indeed, they’re just like everyone else around here.

Maybe I’d fit in better in Woodstock if I paid Popillia japonica the respect they deserve. They embody the Woodstock Nation. They shouldn’t be killed; they should be celebrated.

Get those seeds in the ground: Garden projects across the Catskills