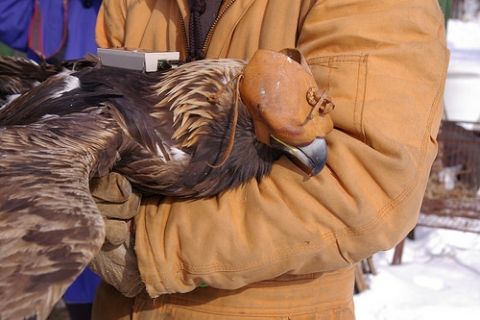 Above: A juvenile golden eagle was captured in the town of Andes on Saturday, February 8 and fitted with a GPS tracking device. Photos by Julia Reischel.

A rare eastern golden eagle was captured and fitted with a solar-powered GPS device this morning in the town of Andes. It is the first golden eagle captured in New York state under a research program run by the Delaware-Otsego Audubon Society (DOAS).

"This is a very rare bird in the east," said Tom Salo, the research coordinator for the DOAS Golden Eagle project, who was on-site on a frigid morning in Andes to watch the eagle get tagged and released. "It is an endangered species in New York State, where it is no longer nesting."

Below: Tom Salo measures the golden eagle after it is captured in Andes.

Below: The GPS tracker attached to the golden eagle's back. Each tracker costs about $2,500.

The bird captured today, named "Max," is the first eagle caught by a joint program of the DOAS and West Virginia University.

The eagle was caught early in the morning on a mountaintop in Andes. By 9:30 a.m., a small crowd of elated professional and amateur ornithologists gathered in a barn nearby to see Max (short for Maxine), a 9.5-pound female that sported juvenile white-tipped tail feathers.

Wearing a leather hood that covered its eyes, the eagle seemed utterly calm as it was handled by scientists and volunteers.

Later today, Max will be released, now with a tracking device the size of a matchbox strapped to its back.

Below: White tail feathers show that this eagle is a juvenile.

According to Salo, there are 2,000 to 3,000 golden eagles east of the Mississippi. They are listed as endangered in New York state. The species winters in the eastern United States and summers in Canada.

Data from Max's wanderings may show that the western Catskills -- in particular Delaware County -- are a golden eagle migratory hot spot.

Salo said the western Catskills seem to be a key stop on the golden eagles' migration path.

Using wildlife cameras baited with deer carcasses on high ridges around the Catskills, DOAS volunteers have counted a high number of golden eagles passing through Delaware County each year. At one site on Franklin Mountain near Oneonta, an average of 160 golden eagles visit each season.

"We're discovered that this area is an important migratory and wintering area for golden eagles," Salo said.

Tood Katzner, a scientist at West Virginia University (WVU), has been fitting golden eagles with GPS devices to track their migratory patterns since 2006. But until today, no one had tagged a golden eagle in New York as part of his program.

So this winter, the DOAS and Katzner teamed up on a project to capture and tag golden eagles. The DOAS raises private funds to buy the GPS devices -- which can run to $2,500 each -- and keeps the traps baited with roadkilled deer. Katzner, who also runs a company that builds the GPS devices, sells them to the DOAS at a discount and shares the data they collect in his work at WVU. Scott Van Arsdale, a licensed trapper from the New York Department of Conservation, captures the birds and helps attach the GPS trackers.

"We were planning on catching four eagles this winter," Salo said, adding that the extreme cold temperatures have made catching eagles more difficult. There are only two weeks to go before the eagles begin to migrate north, ending this season's program.

That made this morning's visit from Max even sweeter.

Below: A set of photos of the golden eagle in Andes.

Correction: The first edition of this story erroneously stated that the capture and tagging of a golden eagle in Andes on January 8 was a "first for NY." In fact, four golden eagles have been captured and tagged with tracking devices in New York state before this one, according to Scott Van Arsdale, a wildlife technician with the New York Department of Environmental Conservation (NY DEC). See our follow-up story for details.

Also, the project to capture and tag golden eagles wintering in New York is a program run by the Delaware-Otsego Audubon Society in partnership with West Virginia University. The NY DEC is assisting with the project by loaning the services of its licensed trapper, Scott Van Arsdale, but it is otherwise not affiliated with the program.