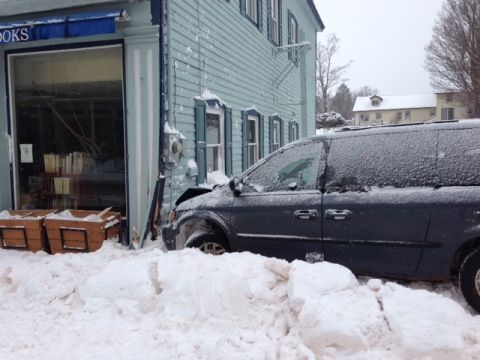 A car crashed into the Wm. H. Adams Antiquarian Books bookstore in Hobart on Wednesday, February 5 at 2:30 p.m. Photos courtesy of Diana and William Adams.

A car slid off State Route 10 and into the side of a bookstore in the village of Hobart this afternoon around 2:30 p.m., just after Delaware County re-opened roads following today's snowstorm.

The bookstore, Wm. H. Adams Antiquarian Books, was closed when the accident occurred, according to Diana Adams, one of its owners. No one at the bookstore was injured. There is no information available about the status of the driver of the vehicle.

The side of the Main Street building was damaged in the crash, and it was difficult to open the door to the building, Diana Adams said.

She added that she and her husband, shop co-owner William Adams, are concerned that the crash may have caused the building to shift on its foundation.

Despite that, however, the Adamses will be open for business as usual this weekend, Diana Adams said. Their store is one of many bookstores in Hobart, which is known as the Catskills' "book village."

The intersection of State Route 10 and Maple Ave. in Hobart where the crash occurred is notorious among its neighbors as a hot spot for car crashes. There, eastbound Route 10 banks down a steep curve to become Main Street. At the bottom of the curve is the Wm. H. Adams bookstore building, which has been rammed multiple times.

"This is the fourth time someone has hit the building," said Diana Adams.

Below: The intersection of State Route 10 and Maple Ave. in Hobart. Image via Google Street View. The Adams bookstore is on the right.

Two of those crashes occurred in 2009, just 20 minutes apart, she said.

"That time, it happened, and then while Bill [Adams] was standing there talking to the driver, another car hit the building," she said.

And other buildings on the same intersection have also been hit. In 2006, a bookstore called The Library Shop across the street from the Adams' store was hit by a car, according to Don Dales, its owner. That storefront now houses the Hobart International Bookport.

After the double crashes at their bookstore in 2009, the Adams' called the state Department of Transportation to ask about improving the intersection, Diana Adams said today.

"They ran some tests and determined that nothing needed to be changed," she said. 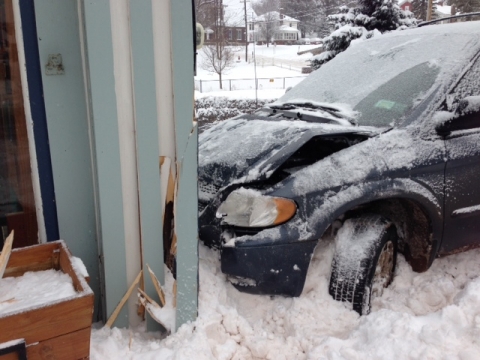