Building a Farm Around the Table: Horton Hill Farm 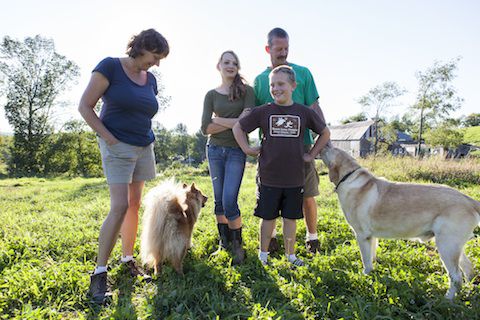 Above: The Parker family (left to right): Carol, Kelly, Bill and Eric, with Lilly and Lincoln. Photography by Richard A. Smith.

Bill and Carol Parker both grew up on farms and were happy to escape them as young adults. Bill’s family raised veal in Jefferson, and Carol spent her teenage years milking cows twice a day at her parents’ dairy farm in East Meredith. They left home for college and the wider world, eventually settling into careers as teachers in Schoharie County and marrying.

When daughter Kelly came along, though, the Parkers were forced to rethink their trips to the grocery store. Pre-packaged, boneless chicken breasts and snacks full of artificial colors and flavorings suddenly seemed even less attractive.

“When we had our first kid, we started really thinking about what we could feed her,” Bill Parker says, sitting at his kitchen table with Carol, Kelly, 16, and son Eric, 10. “So we bought 25 chickens.”

That was the first year. The second year, they quadrupled their stock to 100 birds, and the third year, tripled again to 300. Somewhere along the way, Bill went in with two friends on raising three piglets.

“We’d have friends over for dinner, serve them chicken or pork chops, and they’d say, ‘This is so good, can you do some for me?’” Bill Parker says.

So was born Horton Hill Farm in Jefferson, which today produces chicken, pork, eggs and honey. Horton Hill specializes in heritage breeds, including Gloucestershire Old Spot pigs and Ameraucana and Rhode Island Red chickens. The Parkers sell everything off the front porch of their house and at pop-up markets. Their customers come from around the western Catskills, including many second-home owners who pick up orders on their Monday morning commutes back to urban lives.

Bill and Carol both teach full-time at South Kortright and Jefferson schools, respectively, so summers are particularly busy at the 62-acre farm, where in addition to caring for the business-side animals, the family keeps pet horses, dogs and a cat and maintains a vegetable garden large enough to feed the four of them year-round. Last year, Horton Hill sold 23 pigs and 400 meat chickens, as well as eggs and honey.

“We start early and we end late,” Carol says of their summer days.

Kelly and Eric pitch in with chores, collecting eggs and feeding the seven adult pigs and their offspring, as well as a barn full of laying hens and meat chickens of many breeds. During the inaugural Schoharie County Family Farm Day tour in August, Eric, a fifth-grader, greeted visitors and kept count of the attendance, which eventually rose to 60 people. The farm sold out of most products that day, as Manhattanites brought their toddlers to toss dried corn to hens in the yard and local residents ventured over from neighboring counties to pet the piglets, buy honey from the farm’s four hives and, if they were lucky, taste Bill’s homemade mead.

Above: Collecting eggs from the laying hens is one of 10-year-old Eric Parker’s daily chores.

These days, the family eats very little that isn’t grown at home or at the home of farming friends. They barter chickens and pork in exchange for bread from Bread Fellows in Delhi and beef from Weinland Farms in Hobart. This summer Carol packed and froze 20 pounds of blueberries the family picked at Blue Sky Farm & Winery in Stamford.

“It’s definitely changed our lifestyle,” Carol says. “You can’t escape the grocery store, but eating this way has gotten me to read labels so much more.”

Above: A Horton Hill pig.

As for Kelly and Eric, whose appearance sparked the whole enterprise, they are growing up on a farm like both their parents did, sharing the hard work of nurturing the family’s food supply and livelihood, and showing prize-winning chickens. Kelly has won the grand championship at the Schoharie County Sunshine Fair four times. She also shares her mother’s love of horses and competes in equestrian events. But eating every meal in a house that raises its own pigs has given her another, more unusual skill, as well, her dad says: she can sit down to breakfast and tell by taste which of the three local slaughterhouses processed the meat on her plate.

This article originally appeared in the print version of the 2014 Catskills Food Guide, our annual publication covering local farms, restaurants and food purveyors. Find a copy near you here