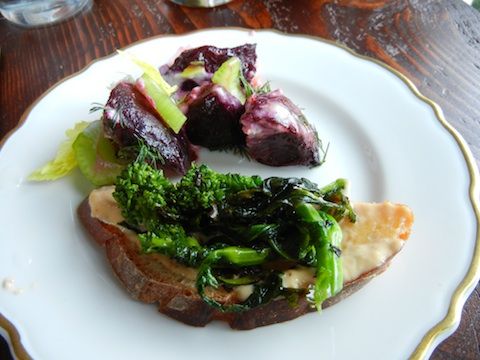 Sohail Zandi’s friends think he’s crazy. He could have stayed in the New York City restaurant world, where he's worked successfully for a decade. Instead, in January, he left Brooklyn, bought an old building on Bovina’s Main Street and opened a restaurant in the boondocks of Delaware County.

His friends aren’t the only ones.

“A lot of my customers think I’m crazy, too. They come in and they say ‘This will never work,’” Zandi said in his dining room one night last week. “But then I point out that they are sitting here eating.”

Brushland Eating House debuted May 14 in the space formerly occupied by Two Old Tarts bakery, which is reopening in Andes soon. Its name is part homage to local pioneer Alexander Brush and part reference to a term used for Colonial-era eateries where diners would gather, often in a train car, in the days before the word “restaurant” entered American vernacular.

Zandi worked at Prime Meats and The Grocery down in the city, as well as doing a short stint at Uncle Boon’s. He drafted chef Jordan Terry, another city transplant, to join the team after gaining experience at other big names in the urban jungle, including Dear Bushwick, Frankie’s and Pulino’s.

Together out in the country now, the two of them turn out a mix and match of small plates and mains, ranging from $6 for an a la carte order of potatoes to $26 for a dish called “cut of beef” which varies nightly.

In between, there are a variety of offerings in the $10 range: a burger; a country ham plate featuring homemade cornbread and maple butter; a selection of three slices of baguette toast with toppings that rotate seasonally (the anchovies and radishes with ramp butter are a particular standout). Another must-try: The housemade ricotta pasta, a cross between gnocchi and cavatelli, which comes with a fresh, rich tomato sauce and pecorino for $14.

Below: Baguette toast with seasonal toppings, including anchovies and radishes with ramp butter. Photo by Jennifer Strom.

Beer and wine are available, and a handful of desserts including a slice of birthday cake and a Rice Krispie treat just like you remember from childhood.

Some of the ingredients are sourced locally, including a variety of cheeses from Delaware County dairies. The plan is to gradually incorporate more local ingredients, including beef, said Sara Elbert, Zandi’s girlfriend, who helps run the front of the house and coordinate events.

Below: The bar at Brushland. Photo by Jennifer Strom.

The physical space has undergone some cosmetic changes, with fresh coats of shiny black paint on the built-in bookcases and new wooden bench seats along the wall. The alcove space that served as a small retail spot when it was Two Old Tarts will eventually be employed as a store selling local items and takeout food. The long bar now houses a sophisticated espresso machine, but it’s not set up as a dining area as of yet.

Below: Brushland on a recent evening. Photo by Jennifer Strom.

Zandi and Elbert live in one of the two upstairs apartments and rent the remaining apartment to tourists—including their city friends who come to marvel and eat. The couple’s move to Bovina was prompted, in part, by their temporary escape to Martha’s Vineyard last summer, when Elbert worked on a flower farm and Zandi helped farm livestock and learned to make cheese.

“After that, we knew there was no going back to Brooklyn,” she said.