Why are school buses yellow? Thank Stamford's own Frank Cyr 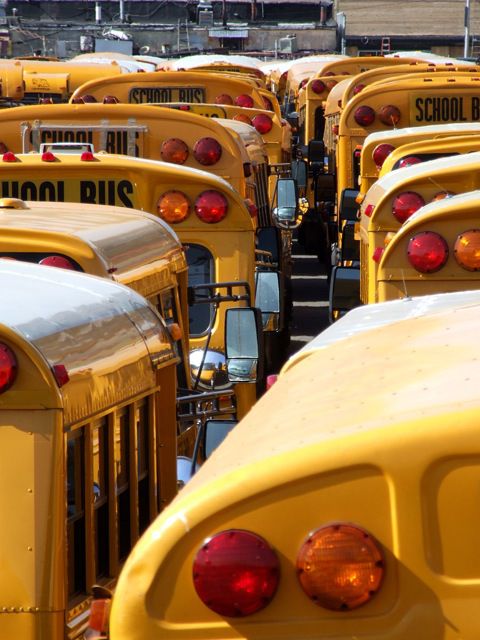 To butcher a quote from Henry Ford: You can have any color school bus you want, as long as it's yellow. But that wasn't always the case: Before a rural education professor led the charge to standardize the school bus, children were taken to school in everything from red, white, and blue buses to horse-drawn wheat wagons.

Cyr was a lifelong advocate for rural education, and a champion of distance learning long before the advent of the Internet. But his lasting claim to fame is a place in history as the "father of the yellow school bus," the New York Times's James Barron writes:

...in the spring of 1939, [Cyr] called together educators, school bus manufacturers and paint experts for a conference that approved the nation’s first school bus safety standards — 42 pages covering everything from axles, batteries and emergency brakes to the inside height of the passenger compartment to, yes, the color that the world saw outside. The standards were published in a booklet with a yellow cover: the yellow was the color the group had chosen.

“They wanted a color that would stand out, that other drivers could see from a distance and that would be identified with a school bus so whenever we saw it, we’d think, there’s a group of kids going someplace,” said Frank Cyr’s son, William. “Before that, they sent kids to school in anything.”

Yellow would stand out in low light and bad weather, Cyr and his colleagues reasoned. More than 70 years later, the zesty yellow-orange hue chosen at the conference is still in use. And among transportation mavens, Cyr is still hailed as a pioneer. From Cyr's profile on the Spaulding Center for Transportation's "Heroes Center":

When questioned about his role at the 1939 conference, Dr. Cyr said that he and the other attendees always used safety as the first criteria for school-bus standards. Indeed, by 1996, research conducted by the National Safety Council found that yellow school buses are safer than the family car and four-times safer than public transportation buses. We have Frank Cyr to thank for that.

For Cyr's son William, the yellow school buses aren't just his father's legacy. They're family. From an obituary published by Columbia Teacher's College, where Frank Cyr was a professor:

It was William Cyr who, as a child, asked the professor, "If you're the father of the yellow school bus, what does that make me?" Cyr replied that, whenever the boy saw a school bus, he could say, "There goes one of my brothers."

Hat tip to local writer and bluesman David Krajicek for tipping us off to this story. --Ed.