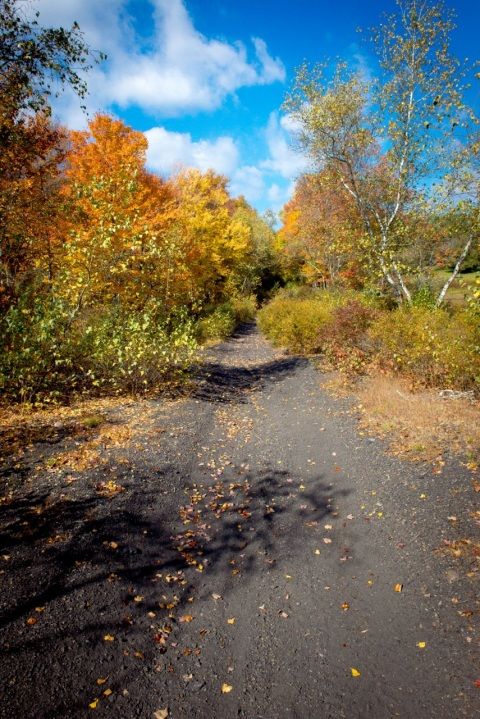 Above: A former rail bed in Hurleyville, part of a 9.2-mile stretch recently acquired by the Open Space Institute and slated for development into a public rail trail. Photo taken by Jesse Wall in October 2013; courtesy of the Center for Discovery.

The Open Space Institute recently announced a pair of big land acquisitions in Sullivan County: A 165-acre farm that will be used to teach farm skills to autistic children, and a 9.2-mile stretch of rail bed from the route of the former O&W railroad that will soon be developed into a public rail trail between Liberty and downtown South Fallsburg.

The rail bed runs through fields, forests and wetlands, and through the hamlets of Ferndale and Hurleyville. The Institute bought the 9.2-mile rail bed from O&W Associates, a company owned by the local Ingber family, said OSI spokesperson Jeff Simms.

The OSI's long-term plan is for the new trail to connect with a growing network of rail trails throughout the Catskills and Hudson Valley that stretches to the Walkway Over The Hudson and beyond to Dutchess County. The trail will be developed in collaboration with the nearby Center for Discovery, an educational center based in Harris that runs day and residential programs for children and young adults with autism.

The trail is part of the Center for Discovery's ongoing efforts to help revitalize Hurleyville, said Center director Patrick Dollard in a statement:

"The idea of partnering with OSI to develop something that everyone in the community will benefit from and will spur economic activity for the entire community is incredibly important to us,” Dollard said. “We want to be sure that our surrounding communities offer opportunities that the individuals in our programs can utilize but also provide resources for our staff to take advantage of as well as our friends and neighbors. It’s critical to our business model to be a good neighbor and enhance our community.”

The Open Space Institute has also teamed up with the Center for Discovery to acquire a 165-acre livestock farm in the town of Neversink, which will be used as an educational farm for the autistic children who live at the Center. The farm, previously owned by Charles and Jan Van Nostrand, was acquired by the OSI and transferred to the Center for Discovery, where it will continue to be run as a working farm.

"They're intending to have young adults with disabilities at the Center work at the farm, to learn skills related to livestock farming, and at the same time they're going to be producing organic meats that will feed the residents and staff at the Center," said Tom Gravel, a project manager at the Open Space Institute who worked on the farm acquisition.

Farming and farm education are a large part of the programming at the Center for Discovery. The Center's farm-based program and fresh-food philosophy made a news splash recently, after a New York Daily News article profiled 20-year-old Billy Nacmias, a young autistic Brooklyn man whose life took a dramatic turn for the better after moving to the upstate campus. In 18 months at the Center, the Daily News reported, Nacmias dropped over 100 pounds and gained a new lease on life:

“When we visited him, Billy rushed out and hugged us and proudly showed us the house he shared with four other kids on this 1,000- acre paradise,” Jack said. “There’s a full-time nurse, all kinds of dedicated counselors, and he works with egg production in the henhouse, with horses and sheep. He dropped from 280 pounds to 168 pounds, and he’s the trail leader on team hikes. He’s also studying drama to play Scrooge in ‘A Christmas Carol.’ ”

According to a recent feature article in NationSwell, a site dedicated to upbeat news about American social innovators, the Center is home to the first residential program in New York State designed to teach autistic children. The story paints a vivid picture of farm life at the Center:

As its name suggests, the school is housed in and adjacent to a converted barn — once a large dairy farm that sent products to New York City — located on a chunk of land that The Center bought nearly a decade ago in neighboring Hurleyville, N.Y. The barn itself is surrounded by chicken coops built into old, multicolored gypsy wagons. Kids gather 200 eggs a day from the coops, which are then distributed to the on-site dining areas and also handed out to neighboring community members as part of The Center’s agriculture program.

In the last eight years, the OSI has helped the Center acquire more than 700 acres of farmland in the area, according to an OSI release announcing the most recent acquisition.

Below: Summer on the Van Nostrand farm. Photo courtesy of the Open Space Institute. 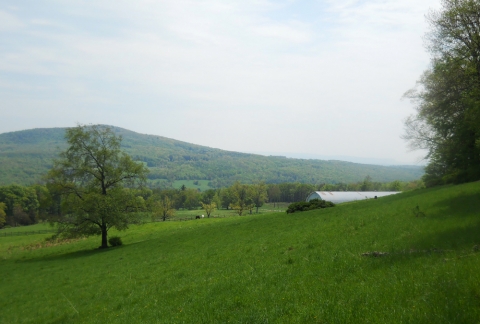