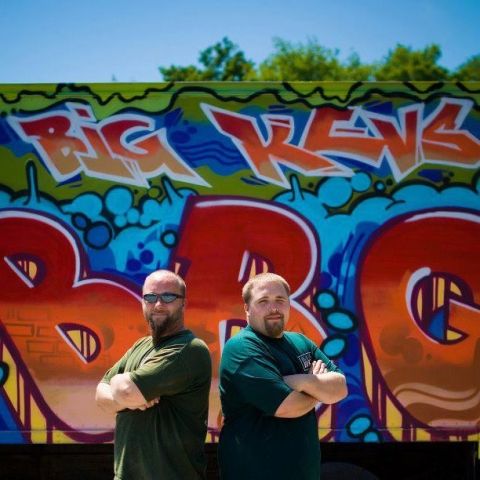 Above: Kevin and Donovan Monahan of Big Kev's BBQ. Since 2010, the brothers have been slinging barbecue on the road and at local festivals. Last Friday, Big Kev's celebrated the opening of a new roadside stand in White Lake, on the corner of Royce Road and Route 17b. If you're jonesing for ribs, pulled pork, brisket or chicken, they're open Wednesday through Sunday from May to November. Call ahead, and they'll set aside your order: Big Kev's regularly sells out.

Today is Neptunalia, an obscure ancient Roman holiday celebrating the god of waters. To ensure rainfall in the coming season, the historians tell us, Romans would take to the countryside and spend the day picnicking under laurel-branch huts, drinking wine and spring water. We're down with that program.

Looking for a place to cool off? Today's Sullivan County Democrat has a handy list of public pools open in the county, with their hours and fees. We liked it so much, we're assembling one for the rest of the Catskills. Stay tuned for that.

Got your own pool? You can help save local trees by keeping track of the bugs in your pool filter. Through August 30, the state Department of Environmental Conservation is calling on pool-owners to keep a sharp eye out for the Asian longhorned beetle, a tree-killing invasive species whose adults are just beginning to emerge for the season. For more information on the program, contact the DEC's Jessica Cancelliere at [email protected].

If you're thinking of heading to Palenville's swimming hole on Kaaterskill Creek, please don't strew garbage around, park illegally, or draw graffiti on the bridge. If that sort of thing keeps up, the town of Catskill may try to shut down access to the popular swimming hole.

Our northwestern neighbors in Otsego County got some flooding last night. Oneonta's City Hall has some damage, CNYNews reports.

Opus 40, Harvey Fite's 6-acre bluestone sculpture in Saugerties, is in the midst of an ambitious restoration effort, with help from local stonemasons and a few fundraising celebrities. In a fascinating article about the restoration, the Saugerties Times' David Gordon reports that Opus 40 could last another 1000 years, if it gets enough TLC from experienced stonemasons.

A federal jury has struck down a lawsuit against SUNY Cobleskill filed in 2009 by one of its own professors, the Daily Star reports. In the lawsuit, professor Thomas Hickey claimed that the college was discriminating against black students with low academic scores by recruiting and admitting them even when they had little chance of graduating, and using their tuition funds to subsidize the school budget. The Times Union reports that Hickey can appeal the jury's decision.

It's the end of an era: Woodstock Video, which has held out for years against the likes of Netflix and streaming video, is closing up shop at last. Here's real estate agent Bob Perl in the Woodstock Times:

"It's one of the last remaining video stores in the country. He's the last of the Mohicans out there."

Up and running once more: The town of New Paltz's website, which has been down for several months after being targeted by Brazilian and Turkish hackers.

Looking spiffy: Gardiner's bridge over the Wallkill River on Route 44/55. No longer flaky blue with rust blobs, the half-painted bridge is now as red as a barn door. So far, most Gardinerites seem to like it.

Zero: Number of people injured in an elevator fire at Catskill Regional Medical Center on Monday, which filled hallways with smoke and forced the hospital and first responders to move patients to other wings.

Eight: Number of people injured in a head-on crash on Route 209 in Wawarsing on Sunday evening, in which a driver fled the scene and is still at large.

NewsShed, our snappy little weekday digest of news, weather and hot bloggy goodness from around the Catskills, is a new item here at the WP. Got a tip for the NewsShed? Send it to [email protected].