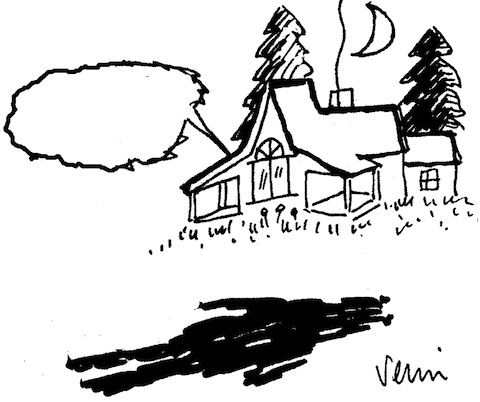 Ellen Verni has been writing "Home Cookin'," her column of Catskills recipes and rumination, for 24 years. She is sharing some of her archived columns with the Watershed Post. The column below first ran on Fathers' Day in 2001. (The above illustration, by Verni's husband Nick Verni, ran with it.) You can get more of Verni on her blog, at homecookincolumn.blogspot.com.

I’d like to start out with a disclaimer: That’s not my rule; that’s my husband’s rule. My husband, Nick, is continuing a long line of family traditions — his family, of course — of insisting on doing things in the traditional manner. By traditional, he means the way his father did it, and his father before him, back in the “old country.”

There has been a microwave oven in my house since 1986. It is placed as far away from human contact as my husband will allow, and it is only this year, with a newer model, that he has finally used it to heat up leftovers. At his insistence, the vegetable garden can only be turned over using a garden spade. No gas-powered tiller is allowed. He says the worms know the difference. I’ve spoken to the worms; they don’t. He doesn’t believe me. When I drag him over to a worm, it won’t talk. Worms are like that, very two-faced.

This brings me to the grill. Well, it’s not really a grill. It’s a grill area. We must be the only family in the U.S. without a gas grill. According to tradition, we’re not even allowed to own a charcoal grill. I’ve attempted to bring hibachis into the family picture, but curiously, they disappear a week after I purchase them. (See column from May 29, 1997, “What’s A Nice Grill Doing In A Place Like This?)

What we have is a not-very-attractive set-up of a discarded oven rack straddling a few cinder blocks and bricks.

Because this is technically a bonfire, it needs to be placed far from the house, away from trees and shrubbery, and ultimately in what is equivalent to the Mojave Desert in the Catskill Mountains. We use a walkie-talkie to find out the status of the food on the grill, and if I need to return with the cooked food as darkness approaches, we send out flares so that I can find my way back to the house.

When the girls were younger, I had to wend my way through discarded toys and a croquet course on the property. Carrying a platter of hot, cooked hamburgers and buns back to the house through this melange of obstacles was very much like walking through a minefield. Toss a dog into this equation, and I found myself dreading the words, “Let’s grill some food tonight.”

Alas, the girls are older and off to college, so the toys are gone. The dog is older, but not very much wiser, and even though my husband was away, I decided I was going to grill something for myself that night. Things were going well; I found dry wood, the fire had burned down to perfect hot embers, and the steak was sizzling nicely when I heard the phone ring in the distance. With strict orders to my dog not to touch the meat, I raced up the hill to the house in the quickening dusk.

It was my husband calling from the city, “By the way, I forgot to tell you; I spoke to George before I left. He said there’s a bear in the neighborhood, so be on the lookout at night.”

Ellen Verni resides in Margaretville, and is the author of the cookbook, “The Kitchen Chronicles: From the ‘D’ Train to a Dirt Road”. Please send comments, as well as recipe suggestions or questions, to her e-mail address, [email protected].