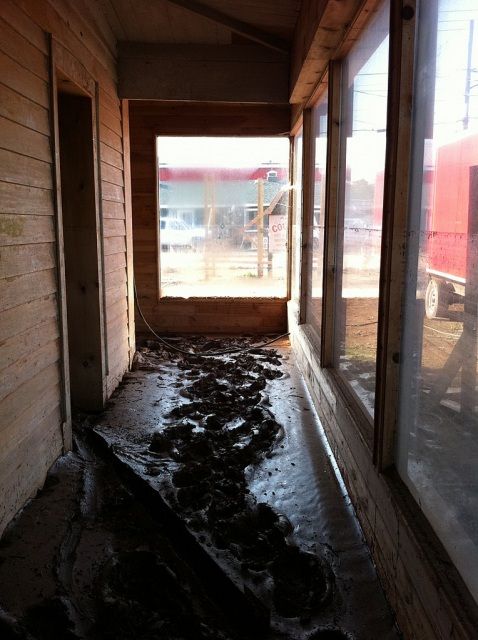 A Prattsville home coated in ankle-deep mud after the 2011 Irene floods. Photo by All Hands Volunteers; published on Flickr under Creative Commons license.

In August of 2011, flooding from Tropical Storm Irene wreaked incredible damage on the Greene County town of Prattsville -- tearing houses off foundations, blasting through roads and buildings, and leaving a trail of toxic wreckage in its wake.

Not all the damage was physical. A recent story in the Times Union, published on March 23, paints a portrait of a town bitterly divided over the handling of the Irene cleanup. In the story, reporter Jamie Larson -- relying heavily on anonymous sources -- digs into accusations by Prattsville residents that town leaders used the recovery process to funnel lucrative contracts to family and friends.

Politicians became cheerleaders for the town's rebirth as it became a symbol for recovery in the region.

But what has gone unnoticed by many are accusations that town officials misused tens of thousands of dollars and refused to release spending records. It has fueled a feud in Prattsville that has pitted neighbor against neighbor and infused the work still faced by the town with accusations and distrust rather than community spirit.

At the heart of the dispute, Larson reports, are accusations that town supervisor Kory O'Hara improperly hired his brother, Kipp O'Hara, and a friend and employee, B.J. Murray, to fill important positions managing the flood cleanup.

The town also faces a $1.5 million lawsuit by local auto repair shop owner Dennis Hull, whose company, Randy's Transmissions, towed about 100 vehicles during Prattsville's flood cleanup. Hull is accusing town officials of slandering him and his business by allowing a critical letter by an irate resident to be read at a town meeting.

To complicate matters, Larson writes, the Hulls and the O'Haras have a long-standing family feud:

[Greene County chairman Wayne] Speenburgh said he believes most of the animosity that has tainted the recovery process stems from a family feud between the Hulls and O'Haras.

Along with being political rivals, the Hulls and members of the O'Hara family are neighbors and have been in a land dispute over a parcel abutting their properties.

With nerves still raw and the work of flood recovery far from over, the Times Union's story has cut deep in Prattsville -- and galvanized another local newspaper into action.

Last week, the Windham Journal, a local newsweekly that has been covering the trials and tribulations of Prattsville's recovery process since the floods hit, ran the first article in a series about the town's current drama. In Thursday's article -- dubbed "Necessity, not nepotism" -- reporter Michael Ryan takes direct aim at the Times Union's report:

Supervisor O'Hara has been branded as a political bully and cunning financial manipulator in a recent Capital Region newspaper investigative report that touched on [Kipp O'Hara's] hiring and other issues, relying almost exclusively on unattributed sources.

The article, without explaining what prompted the investigation, states O'Hara has been accused by unnamed residents of misusing tens of thousands of dollars in state and federal flood recovery money while creating lucrative positions for relatives and friends.

Quoted at length in the story are several local, county and state officials who rallied to Kory O'Hara's defense, saying that the decision to hire the supervisor's brother was made publicly and with the support of other elected officials. Here's Chris Baker, emergency services director for Cattaraugus County, who was dispatched by the New York State Emergency Management Office to support Prattsville's recovery effort:

“It isn't my role to be involved with town decisions but I was in the Command Center for one of the hundreds of daily meetings where the town board talked about who should be hired,” Baker said.

“Kory asked everyone what they thought of using Kipp. He didn't just rip his shirt off to show a big [Superman] “S” and say, 'screw the rest of the world, I'm doing whatever I want.'

Prattsville resident Kevin Piccoli, a second-home owner who stepped up shortly after the flood to chair the Rebuild Prattsville Steering Committee, worries that Prattsville's drama -- and the Times Union's muckraking -- could hurt the town's standing with grantmaking organizations. In a recent letter to the Times Union, Piccoli writes:

We will soon be applying for more grants. As such, we cannot afford to have the grant decision-makers tainted or distracted by small-town politics and we will need the continued support of our county, state and federal officials. These officials also read negative articles, such as this article, and lessen their resolve to be strong, vocal supporters of the town.

In order to be successful in our grant applications, we need to be focused on all the positive things that can come out of Prattsville's Long Term Community Development Town Plan. Countless hours have been spent creating our town's redevelopment plan, so let us stay focused on doing what we need to do to execute on this plan and rally around our rebuilding effort.