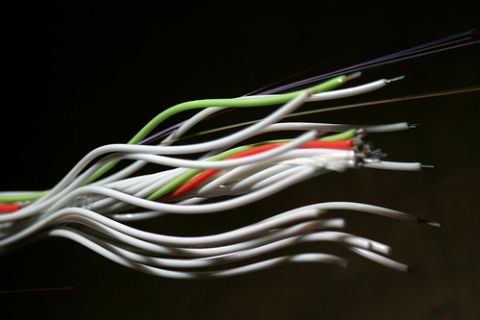 The Internet: It really is a series of tubes. Photo of data cable by Flickr user Arild Nybø; published under Creative Commons license.

A long-awaited project to bring high-speed broadband internet and cable televison to some of the most rural towns in the Catskills got underway earlier this month. By 2015, the project will make broadband service available to over 1900 homes and businesses in Conesville, Gilboa and Halcott -- all deeply rural towns that currently have no access to broadband -- and remote areas of Middletown and Roxbury that have not yet been reached by broadband service.

After years of planning, the first pieces of a network that will eventually span about 112 miles of fiberoptic cable are finally being built. The project was first conceived several years ago, when the Margaretville Telephone Company (MTC) applied for an $8 million federal grant under the 2009 stimulus bill, the American Recovery and Reinvestment Act, which contained $7.2 billion in funding for the expansion of broadband networks in rural and underserved areas.

As originally planned, the project would have served over 2600 homes, said MTC manager Glen Faulkner. When the company's federal grant application was denied, MTC scaled back its proposal and applied again, this time to the state of New York through the Connect NY Broadband Grant Program.

"We scaled down the project and made the argument that for $4 million, we could do 75 percent of the project," Faulkner said.

This March, MTC won a $1.8 million grant from the Connect NY program. The grant is being matched by $1.8 million from the company, and another $250,000 from the nonprofit Catskill Watershed Corporation.

To choose the areas to build out, MTC surveyed residents in the project area, with help from nonprofit partners the MARK Project and the Western Catskills Community Revitalization Council. The survey got about 800 responses, Faulkner said, which were plotted on a map to find hotspots of demand.

"We can look at the clusters and identify in what areas there are residents who truly want broadband," Faulkner said. "That's helping us prioritize our buildout areas, along with businesses and municipal entities."

The first parts of the network under construction lie along South Gilboa Road, State Route 30 and Route 990V, and the first customers are already being connected in that area, Faulkner said. By the end of the year, the company expects to have about 20 miles of cable built, which will bring new service to about 400 households.

Scheduled for construction in 2014 are parts of Halcott Center, Red Kill Valley, Denver Vega Valley, Meeker Hollow, Jump Brook Road and parts of South Gilboa. The project is slated for completion in August of 2015.

The company and its nonprofit partners have also applied for another state grant to expand wireless broadband to parts of Conesville, Roxbury and Gilboa that will not be reached by the fiberoptic network. Many of the most remote homes are at high elevation, where access to wireless signal is easier, Faulkner said.

Without state funding, it's unlikely that the most rural parts of the Catskills will be wired for broadband. For cable companies, expanding broadband to very rural territories isn't a lucrative proposition. In the world of utilities, it's known as the "last mile problem": The most remote customers cost far more to build service to than households in densely-packed neighborhoods. Large telcoms haven't been particularly interested in rural upstate New York: In 2010, Verizon announced that it would not roll out its FiOS broadband service to any more upstate New York communities beyond the urban and suburban markets it already serves.

The failure of the free market to deliver much-needed broadband service on its own has not been lost on local politicians. Last month, local Republican Assemblyman Pete Lopez compared broadband today with electricity a century ago, at a rural-broadband symposium at SUNY Cobleskill: "I’m a capitalist, I’m a conservative, I believe in our businesses," he said, "but there’s some instances where we recognize that the market itself can only deliver so much."

"Last year we built to Halcott's town hall, outside the scope of the grant, just to get service to the core of the town," Faulkner said. "People are sitting in the parking lot getting access to the hot spot."

Full disclosure: Lissa Harris is a shareholder in the Margaretville Telephone Company. The business was founded in 1916 by Harris's great-great-grandfather, John Birdsall, and remains in the family. Harris is not employed by the company or involved in its management.

Lexington overlooked in round one of state broadband grants