Giant floating head of the Hudson: A Catskills transplant? 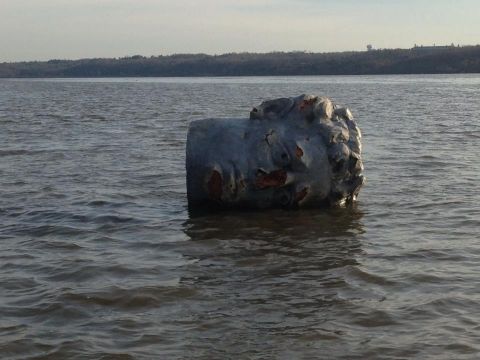 Photo of a giant fiberglass head floating in the Hudson River from the Marist College crew team's Facebook page.

Since the Marist crew team discovered a 7-foot-tall fiberglass head floating in the Hudson River one fine April day, making headlines around the nation, theories on the mysterious head's origins have been flying. Was it a Mardi Gras prop? A theatrical set piece?

Unlikely as it sounds, the enormous head may have hailed from the Delaware County town of Meredith, a good 60 miles away from the bank of the Hudson. Newsday reports that a sharp-eyed reader recently tipped them off to an old Daily Star story in which The Head -- or a very convincing doppelganger -- features prominently:

Reader Roger Caiazza of Liverpool, N.Y., alerted Newsday Westchester to an Oneonta Daily Star story from Sept. 2, 2004, about "The Head" -- a giant Fiberglas-over-foam sculpture that held a commanding presence high atop Irish Hill in Meredith, Delaware County, a small town amid rolling hills on the western edges of the Catskill Mountains.

According to the Daily Star, The Head belonged to Louis and Kimberly Moses, an Indiana couple formerly from New Jersey who placed it on 150 acres they had bought in Meredith in 2002 with plans to build a house there.

The Head, according to Daily Star reporter Patricia Breakey, began life as a Saks Fifth Avenue prop, and was sold at auction to a junkyard, where the Moseses bought it. After keeping it in their New Jersey backyard for roughly 10 years, the Moseses decided to move it to their property upstate in Meredith. Breakey reported that The Head was as much of a local sensation in 2004 as it was in 2013:

Kimberly Moses said the statue’s name is The Head, although a lot of people think it looks like actor Sylvester Stallone.

She and her husband loaded The Head into their pickup truck about two months ago and headed for the hills.

"It takes up the whole back of the truck, and it really made an impression as we were driving along," Louis Moses said. "I stopped in Delhi to see Tom Leo and found out later that people were running up the street after us as we drove away."

He added that they parked in back of the Delhi Diner, and while they were eating, they overheard a little boy trying to alert his mother.

"He said, ’Mommy, Mommy there is a monster out there,’ but she didn’t believe him until she looked out the window," Louis Moses said.

In an effort to verify The Head's Delaware County origins, Newsday contacted Martha Van Burek, director of the West Kortright Centre. Van Burek believes Meredith's Head, which disappeared from Irish Hill sometime around 2005, is indeed the one found in the Hudson -- and that it belongs back up in the mountains.

"I think it should come home to Irish Hill," she said.

But Bergen County, New Jersey may have a prior claim on the sculpture. A blogger recently exhumed an old Weird New Jersey story from 1999, featuring what appears to be The Head in a Bergen County backyard, possibly that of Louis and Kimberly Moses. The 1999 article:

After learning about a giant head in someone’s backyard, we decided that an extended lunchtime investigation trip was warranted. The head turned out to be everything promised. The head sits in the backyard of a house in Bergen County, which shows telltale signs of being a truly weird place. In addition to the head, there were small Tiki idols on tree stumps, and a large painted fish hanging on the side of the house. As we stopped to take a couple of photos, the owner of the head came out to his car. We decided to ask him about his big head and whether we could pose next to it. He granted permission for our photo shoot and explained that the head came from Saks Fifth Ave in New York. The question we didn’t ask; why would you want a giant head sticking out of the ground in your backyard?

The question nobody's asked yet: If The Head were to be restored to its Meredith hillside, would the New York City Department of Environmental Protection let it stay? According to Newsday, the Moseses sold their property to the city's watershed land acquisition program some years ago. Agricultural and recreational use is allowed on some city-owned watershed property, but there's nothing in the watershed rules about giant fiberglass heads.

The upside to the freeze: Ice boating
Plane crashes into Hudson River between Germantown and Catskill

How the Half Moon weathered Sandy