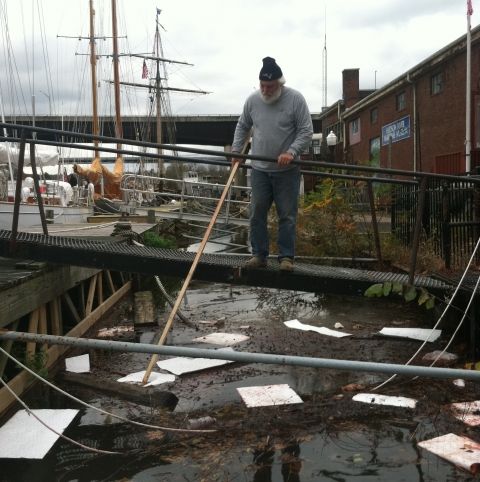 Above: Capt. Dave Thompson uses absorbent pads to try and soak up petroleum that spilled into the Rondout Creek in Kingston on Tuesday. Photo courtesy of Riverkeeper's Dan Shapley.

In the wake of Superstorm Sandy, a petroleum spill has been spotted in the Rondout Creek in Kingston that some believe will have a lasting impact.

Most of the spill has already washed downstream into the Hudson River before it could be cleaned up, witnesses said. Not wanting to wait for officials to clean up the spill, a volunteer crew did their best on Wednesday to remove what still remained of the spill from the creek.

Local residents and members of Riverkeeper reported the spill to the Kingston Fire Department and the Department of Environmental Conservation (DEC), and said petroleum has pooled in sections of the creek near the Hudson River Maritime Museum and along Rondout Landing.

“There hasn’t really been a response to this spill, [the DEC] are certainly dealing with a lot right now with the storm, so I don’t want to pass judgment on their value of it,” said Dan Shapley, membership and events manager of Riverkeeper, speaking on Wednesday evening.  “But I don’t think the extent of this incident is truly appreciated.”

Shapley said the spill occurred at approximately 2:30 a.m. on Tuesday, and oil was seen by local captains as petroleum began flowing from the Esopus side of the creek.

According to The Daily Freeman, Kingston Fire Chief John Reinhardt said water has damaged a 265-gallon heating fuel tank near a building on 50 North St.

However, Shapley believes that the relatively minor spill from the 265-gallon tank is a different incident than the one near the Maritime Museum, which he said is much larger.

Capt. Dave Thompson, who was one of the first people to see the spill impacting the Rondout on Tuesday morning, said he noticed a 100-yard slick of oil in the water around 2:30 a.m. according to the Freeman.

In a video by The Freeman, Thompson said he believes the oil should be cleaned up quickly, as he has seen ducks and geese covered with oil.

Since the initial spill occurred on Tuesday morning, much of the petroleum that flowed into the Rondout Creek has left the area, but pools of oil remain in closed off areas – such as docks – along the river, Shapley said.

“It was much more, but a lot of that has washed out,” Shapley said.

However, Shapley said a group of citizens came together to clean the oil on Wednesday. Shapley said along with Thompson and a crew member from another boat docked on the creek, they began using absorbent pads to remove the thickest areas of the oil slick.

“Since it became clear the DEC was not going to respond Wednesday, we took matters into our own hands as best we could,” Shapley said.

Shapley said there is visible oil residue in the water and that bubbles of oil can been seen emerging from the water, and believes the DEC needs to investigate exactly where the spill came from.

“Whether or not professionals could remove more oil is unclear to me, but the source of the spill still needs to be investigated, and we are trying to ensure that DEC does investigate,” Shapley said.  “We are mindful that there are many spills related to Sandy to investigate, but we want to make sure this one doesn't go unaddressed.”

Moving forward, Shapley said the spill was a reminder of what needs to be considered when storm surges occur along the river and how oil spills have a lasting impact on the wildlife of the area.

“This is one example, though dramatic, of something that happens widely in many places along the river as a result of this storm surge,” Shapley said. “We need to think about our shorelines and what we have near them.”

On Tuesday, Riverkeeper wrote in a blog post that Sandy caused widespread toxic spills in the Hudson River, and likened the storm's impact to "an Exxon Valdez spill from nonpoint sources":

The impact of Sandy’s storm surge is enormous, causing widespread pollution of the Hudson River and New York Harbor by a variety of toxic chemicals, including petroleum and fluids from cars and boats; contaminants from flooded subways, roads, parking lots and tunnels; and contaminants washed from shoreline industrial sites, as well as commercial and residential buildings.

Oil sheens and debris have been observed—everything from 55-gallon drums and quart-sized containers of transmission fluid, to wrecked boats and swamped vehicles with leaking fuel tanks. Just about anything that can float is being observed.

The upside to the freeze: Ice boating

Giant floating head of the Hudson: A Catskills transplant?
Plane crashes into Hudson River between Germantown and Catskill

How the Half Moon weathered Sandy