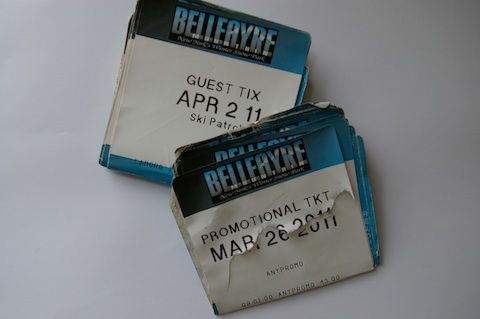 For years, the state-owned Belleayre Mountain Ski Center in New York's Catskill mountains was a playground for police officers and other “VIP” skiers who were allowed to ski for free at the discretion of Belleayre management.

Two years ago, Belleayre came under fire for giving away hundreds of thousands of dollars a year in free ski passes. At the time, the New York State Department of Environmental Conservation, which manages the ski mountain, explained the ticket giveaways as a promotion to attract more skiers.

But the DEC is going to have a hard time explaining this one: Belleayre management routinely allowed and encouraged local, state and New York City Department of Environmental Protection police officers to ski for free.

Documents obtained by the Watershed Post show that Belleayre management received memos from local police departments that contained lists of their officers. (Click on the links to see the actual memos.)

One 2009 memo, from the Olive Police Department, thanked Belleayre superintendent Tony Lanza for “complimentary skiing.” Another, sent in 2008 by the Ulster County Sheriff’s Office, expressed gratitude for “any consideration or professional courtesy” extended to officers. A memo from the Woodstock Police Department included a list of officers “that [Belleayre administration] requested.”

The police officer ski pass giveaways were part of a larger free ticket program. The Watershed Post has obtained a copy of a ledger that includes daily logs of people who received “Administrative VIP Passes” in the 2009-2010 ski season. The ledger includes the names of police officers as well as many others who skied for free at Belleayre.

In that ski season, according to the Times-Union, the taxpayer-supported ski center gave out nearly 16,000 free tickets, comprising about 10 percent of its skier visits, and posted a $1 million operating loss.

The names of 33 New York State Police officers appeared on a 2008 memo to Belleayre from Troop F, Zone 3. Attempts by the Watershed Post to get an explanation for the memo from state police spokespeople were unsuccessful.

Olive police commissioner Bruce La Monda, whose signature appears on the 2009 memo to Belleayre from the Olive Police Department, defended the practice of giving free tickets to officers and denied that any favors were expected in return.

“They gave complimentary skiing to police departments,” he said. “They weren't getting anything in response, not really. If they had an emergency, Shandaken and Olive would cover it, and I guess they were showing their appreciation.”

In addition to the NYSP and Olive memos, lists of officers were sent to Belleayre from the New York City Department of Environmental Protection’s Ashokan Precinct (2008-2009 and 2009-2010), police departments in the towns of Shawangunk and Woodstock, and the Ulster County Sheriff’s Office. None of these police departments responded to inquiries about the memos.

Other documents in the Watershed Post’s possession confirm that the Inspector General's office has been investigating the issue for several years. A FOIL request for information about any investigation of ski pass giveaways at Belleayre, which was submitted to the IG's office by the Watershed Post in April, was denied on the grounds that the matter was “the subject of an ongoing confidential investigation.”

Earlier this month, Lanza was fired abruptly and with no explanation by the DEC, whose spokesperson said only that Lanza's dismissal was a “personnel matter.”

At the time of his firing, Lanza did not respond to repeated attempts to contact him. This week, Lanza did not answer an attempt to reach him by cell phone, and his voicemail box was not accepting messages.

“[W]e have no comment at this time. Please reach out to the IG's office.”

In addition to the lists of local officers, Belleayre kept daily logs of skiers who were issued “Administration VIP Cards.” One such ledger, kept at a single ticket location during the 2009 - 2010 ski season and obtained by the Watershed Post, lists hundreds of such cards given away.

According to Lori Fairbairn, a former Belleayre employee who provided the documents to the Watershed Post, the cards entitled the bearer to free skiing for the day.

Each item in the ledger includes a “Description” field, which appears to explain why or on whose authority the passes were given. Many of the passes do indeed appear to have been given for promotional purposes (“Press,” “RadX”).

A staffer at Senator Bonacic’s office said that she was unaware of the matter. Attempts to reach McGrath were unsuccessful.

The Watershed Post does not have documentation of Belleayre’s ski pass practices during the most recent two ski seasons.

In 2011, a separate discount ticket program run as a skier promotion by Belleayre was cancelled abruptly, prompting outrage and lobbying efforts from local businesses and community leaders who sought to get the program reinstated.

This January, Belleayre partially restored the discount ticket program. In an article about the restoration of the discounts, the Catskill Mountain News wrote without attribution that the discounts were axed because of complaints from other ski centers about Belleayre undercutting local ski prices.

Fairbairn, a former Belleayre employee who worked on the mountain from 2001 to January of 2011, kept documentation of Belleayre's ski pass giveaways while she was employed at the ski center. From 2007 to July of 2010, Fairbairn was a clerk in the administration office, where she helped to administer the free ski pass program.

Fairbairn claims that Belleayre management demoted her, and later laid her off permanently, in retaliation for bringing workplace grievances. On December 31, 2010, with the DEC in the grip of a budget crisis, Fairbairn was laid off along with 42 other Belleayre employees. The following month, according to documents in a complaint Fairbairn filed with the state Division of Human Rights, every other employee except Fairbairn was either offered a job as a seasonal employee or transferred to another work site.

Fairbairn had a tumultuous relationship with her bosses for years, and freely admits that she had a drinking problem while working at Belleayre -- a problem that was often cited in Fairbairn’s efforts to get her workplace grievances addressed.

In 2007, Fairbairn was disciplined for damaging a mirror in a hotel room in Syracuse while working for Belleayre at the New York State Fair. In July of 2010, Lanza formally requested that Fairbairn receive a full medical evaluation because of “excessive absences” and “an alcohol/drug problem,” an action Fairbairn claims was taken in retaliation for her filing grievances. At that time, Fairbairn was demoted from the administration desk to the ticket booth at the Belleayre Beach.

A medical and psychological evaluation conducted by the state Department of Civil Services in September of 2010 found Fairbairn “fit to perform the essential duties” of her administration job.

Fairbairn said that Lanza was a bullying boss who held her to different standards than other employees and refused to allow her time off for legitimate medical issues. She said that she is now sober.

“Was I a perfect employee? No. Was I put on probation? Absolutely,” she said. “I wasn’t perfect. Not at all. But everything I’ve ever done, I’ve been held accountable for.”

Beginning years before she came forward with the allegations on ski pass giveaways, Fairbairn filed grievances with her union, the New York State Division of Human Rights, and the US Equal Employment Opportunity Commission, alleging that she was being bullied and discriminated against by Lanza and other Belleayre officials.

Fairbairn said that when she became frustrated by the official response to her grievances of bullying and abuse, she began documenting Belleayre’s practice of giving out free ski passes.

“[Lanza] was bullying me,” she said. “When I couldn’t get anywhere on that front, I opened my mouth about the tickets and state funds.”

Fairbairn said that she believed the ticket giveaways were unethical.

“If my family member works at the post office, do his family and friends get postage for free? No,” she said. “I knew what he was doing [with the VIP passes], and everybody else who worked there did too.”

When Fairbairn was demoted to the Belleayre Beach position, she photocopied the ledger of 2009 - 2010 free ski passes and sent it to several state agencies, including the Inspector General’s office. Fairbairn said it was only one of several similar ledgers kept at different ticket locations on the mountain.

Documents Fairbairn provided to the Watershed Post indicate that internal investigators at DEC had seen the ledger, and were aware of her allegations, by January of 2011.

Last week, after the DEC fired Lanza without citing a reason, Fairbairn decided to go public with her story.

Fairbairn’s allegations center on Lanza, her former boss and the object of many of her workplace grievances. But La Monda said that the practice of giving police officers free tickets originated long before Lanza.

“This wasn’t something that Tony grabbed out of the air and started some great big controversy over; it was something he inherited,” La Monda said. “Tony is the fall guy here.”

Julia Reischel and Andrew Wyrich contributed to the reporting of this article.

Full disclosure of the Watershed Post’s relationship with Belleayre: In 2011, the Watershed Post negotiated with DEC employees in the Belleayre marketing department over the prospect of Belleayre buying advertising on our website. They told us that they could not pay in cash for advertising, and offered to pay for advertising with free ski passes. The negotiations fell through, and the ad never ran. More recently, we began running advertising in exchange for money on behalf of the Belleayre Music Festival, which is run by a separate organization.