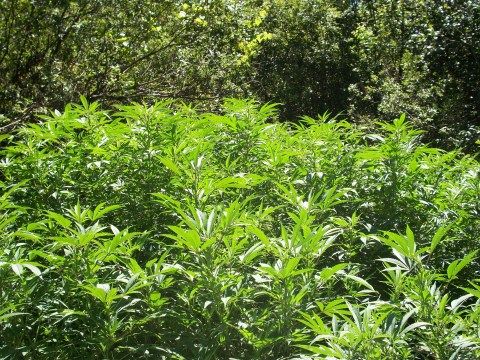 Gregory F. Stevenson of Egelston Drive in Esperance and Ronald L. Ragan of Ragan Road in Sloansville were both charged after State Police in Cobleskill stopped a vehicle for a “routine violation” and subsequently learned information of where to seize the marijuana plants.

The plants, which ranged between 5 and 7 feet tall, were found with hydroponic equipment and $2,000 cash, the press release said.

The 460 plants were growing in the vicinity of Egelston Drive and Ragan Road as well as Brandon Road and Esperance Road. Police said the New York Air National Guard and Schoharie County Sherriff’s office and the Community Narcotics Enforcement Unit assisted in the seizure of the plants.

Two arrested, 1,087 decks of heroin seized in Woodstock
Route 28 grow house busted in Shokan
A week of drug busts around the Catskills